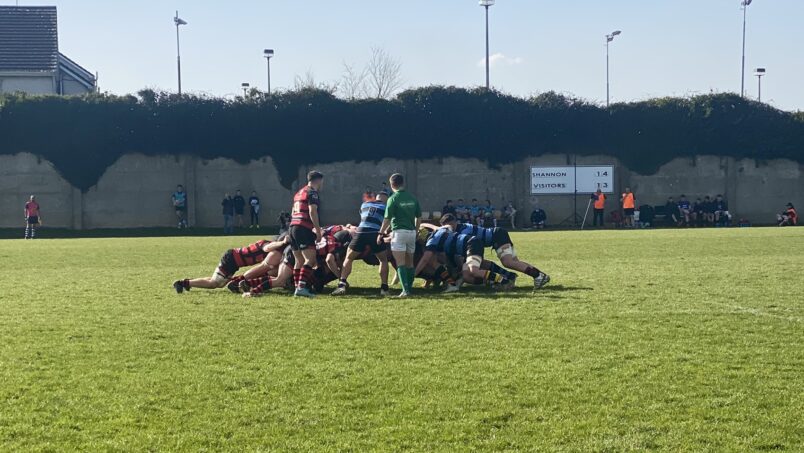 Shannon in action against City of Armagh. Shannon RFC Twitter

The battle hots up for semi-final play-off positions in the top three Divisions of the Men’s All Ireland League.

Cork Constitution lost at home to leaders Clontarf 24-12 who as a result of this bonus point win are guaranteed top spot. John Forde and Alex McHenry scored late tries for the Temple Hill Side with Jack Crowley adding one conversion.

Four penalties from Evan Cusack was not enough for Young Munster who lost 18-12 away to Terenure College.

Lansdowne defeated UCC 52-21 in a tie that had to be played on Sunday. Tadgh McCarthy, Billy Kingston and George Coomber scored tries for the Students and Daniel Squires converted all three.

Highfield still retain second place in Division 1B after their 27-22 defeat away to Naas in a thrilling contest. Mark Dorgan, Ronán O’Sullivan and Paddy O’Toole scored tries for Highfield and Shane O’Riordan kicked two conversions and a penalty.

Shannon remain in third place but are just a point behind Highfield after their 29-20 bonus point win on the back pitch in Thomond Park. Aaron Hehir, Alan Flannery and Jamie McGarry scored tries for Shannon, who were also awarded a penalty try. John O’Sullivan kicked two conversions and a penalty.

Cashel moved closer to a home semi-final tie in Division 2A after their hard fought 22-15 home win over U.L. Bohemian. Brendan Crosse, Fearghail O’Neill and Alan McMahon scored tries for Cashel and Dan O’Neill kicked two conversions and a penalty. Joe Murray scored a first half try for U.L. Bohes and Harry Byrne added a penalty and a conversion.

Old Crescent moved up to fifth place after their 25-17 win over fourth placed Ballymena at Takumi Park and are now just a point behind the Ulster side. Val McDermott scored two tries for the home side and Gary Fitzgerald and Paul McNamara got one each. Ronan McKenna kicked a conversion and a penalty.

Two late tries by James Vaughan and Cameron O’Shaughnessy earned Dolphin a four try bonus point, which was enough to ensure that they are clear of the relegation play-off match, despite losing at home to table toppers Queen University 46-29. Paul Dowling and Dave Jennings were Dolphin’s other try scorers. Daryl Foley kicked three conversions and a penalty.

Nenagh Ormond’s 36-19 defeat at home by Buccaneers almost looks certain that will face Rainey Old Boys in the relegation play-off. Willie Coffey, David Gleeson and Conor McMahon scored tries for Nenagh and McMahon and Fionn McGibney each kicked a conversion.

Midleton’s 24-8 bonus point home win over Bangor means they still have an outside chance of making the Division 2C play-offs. Will Casey scored two tries for the East Cork side and Ryan Lehane and Bryan Moore also scored tries, with Stuart Lee adding two conversions.

A late rally by City of Derry that yielded thirteen unanswered points saw the Ulster side move out of the relegation zone after their 23-19 home win over Sunday’s Well. The visitors were in control of this game for long periods but poor decision making cost them. Conor O’Brien scored the Well’s try and Fabian Loughrey converted and added four penalties.