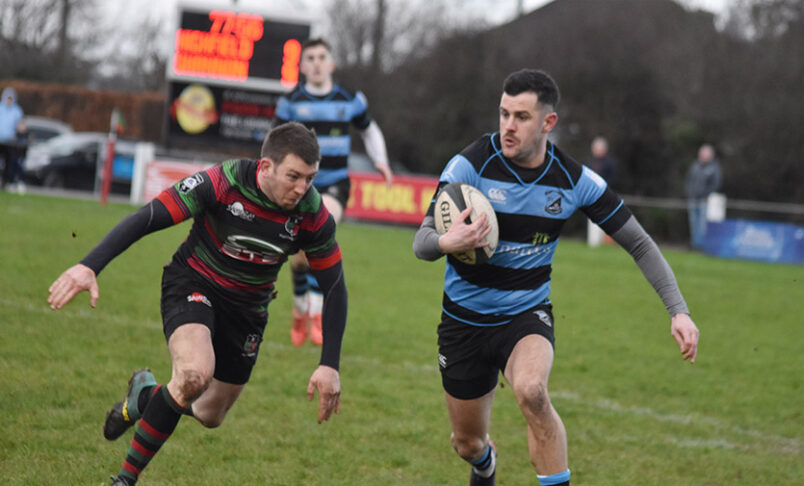 Highfield were held to a 9-9 draw by Shannon at Woodleigh Park on Saturday. Credit: Colbert O'Sullivan

The All Ireland League resumed this weekend with a full schedule of games that were all played.

Young Munster maintained their challenge in Division 1A with a late 27-20 bonus point win over U.C.D. at Tom Clifford Park. The Cookies built up a 15-3 interval lead with tries from Conor Hayes and an intercept try by Pat Ryan. Evan Cusack converted one of the tries and also kicked a penalty. Jason Kiely scored the home sides third try, but the students fought back to level 20-20 and a late try from Patrick Campbell converted by Cusack sealed the points for Young Munster.

Cork Constitution’s hopes of a top four finish were dealt a blow at Lakelands Park, after Terenure College did the double with a 13-6 win over the Leesiders. Aidan Moynihan kicked two penalties for the Temple Hill side.

Garryowen’s poor recent run continued when they lost 36-7 away to Clontarf. The current league leaders had the bonus point wrapped up in the opening half  as they led 29-0 at the interval. Jack Daly scored Garryowen’s try and Tony Butler converted.

U.C.C. went down to another heavy defeat losing 53-0 to Dublin University at the Mardyke.

In the Women’s top four All Ireland League, a late converted try by Railway Union saw them defeat U.L. Bohemian 14-10 at Willow Lodge. The sides were level 7-7 at half time with Rachel Allen scoring a try for the Limerick side and Nicole Cronin converting and also adding a penalty.

Ballincollig made a great start to the Women’s Conference with a 17-15 win over Malone at Gibson Park. Heather Kennedy scored two tries for the Cork side and Denise Redmond added a try and a conversion.

Back to the men’s All-Ireland League, Division 1B leaders Highfield were held 9-9 by Shannon at Woodleigh Park and are now three points behind new leaders Old Wesley who were 26-8 winners at home to City of Armagh. The sides were level 3-3 at half time with James Taylor kicking three penalties for the home side and John O’Sullivan replying with three kicks for Shannon. Taylor had an opportunity to win it at the death but his long rangepenalty effort just missed the target.

Cashel maintained their challenge for a top four finish in Division 2A with a 14-10 home win over M.U. Barnhall. Alan McMahon scored a try for Cashel and Cian Mullane kicked three penalties.

Old Crescent eased their relegation worries with a convincing 34-15 bonus point win over U.L. Bohemian at the U.L. Arena  to make amends for their 28-17 defeat by the same opposition at Takumi Park before Christmas.

Niall Hardiman opened the scoring for Crescent after seven minutes and Ronan McKenna converted before Bohes replied with a penalty midway through the half. A try Cathal O’Reilly on the stroke of half time gave the visitors a 12-3 interval lead.

Hardiman scored his second try on forty seven minutes and McKenna converted. Minutes later Bohes were back in the match with a converted try. Tries by Dan Hurley and McKenna along with a conversion by McKenna sealed the five points for the visitors.

Midleton’s hopes of a top four finish were dealt a blow when they lost 18-10 away to Tullamore. Rory Horgan scored a try for Midleton and  Stuart Lee converted and also added a penalty.

Sunday’s Well recorded their first win of the campaign with a 20-13 win over Bruff in an exciting game at Musgrave Park that could have gone either way. Gary O’Sullivan, Billy Pope and Sean McCarthy scored tries for the ‘Well and Fabien Loughrey kicked a conversion and a penalty. Bruff replied with a try from Jack O’Grady and Paul Collins converted and also added two penalties.