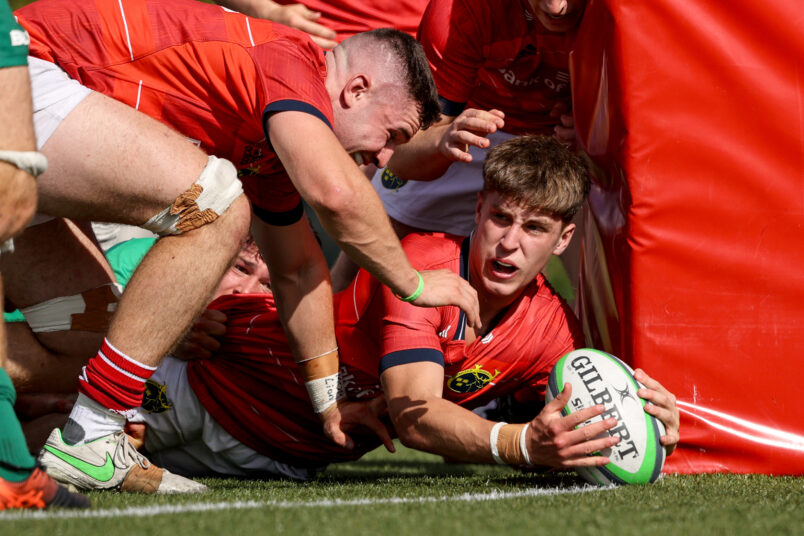 It was a busy weekend of age-grade Interprovincial action with three matches taking place across Saturday and Sunday.

On Saturday, the Munster U18 Girls saw off Ulster 47-5 in Musgrave Park.  Read the full match report here.

On Sunday, Munster U18 Boys Clubs and U19 Boys both faced off against Connacht in a double-header in UL.

The U18 Boys Clubs found themselves beaten 33-42 while the U19 Boys ran out winners when they beat Connacht 26-17.

Kicking off into a strong wind Munster got scoring under way. With only a minute on the clock a Connacht clearance kick was blocked down by Kinsale’s Zach Allen.

A sequence of fast passes out to Mason Cawley saw him cruise over in the corner. Unfortunately, the conversion that followed taken by captain Dylan Hicks hit the post.

A dominant Connacht fought back and scored four successive tries off the back of Munster infringements.

But Munster got their names back on the score sheets when Dylan Hicks crashed over in the 30th minute.

A yellow card for Connacht saw them go down to 14 men just before the half-time.

Connacht got the second-half scoring underway with a 44th minute try.

A tap and go on in the 50th minute saw Ryan Delaney crash over. Converted by Hicks Munster were slowly starting to claw their way back into the game.

It become tit for tat as teams traded scores from the 50th minute onwards.

Connacht found the whitewash once more in the 54th minute.

But Munster retaliated with a further two scores from Michael O’ Donovan in the 58th minute and off the back of a maul in the 68th.

But it wasn’t enough for this young side as the score line finished 42-33 to Connacht.

While it was Connacht that dominated the first half of the afternoon session here in the University of Limerick, scoring three successive tries, a much stronger second 40 for Munster saw them fight back and claim victory.

It wasn’t until the stroke of half-time that Munster found the try line as centre Gordon Wood crashed over off the back of a scrum. Converted by Ben O’ Connor the score-line stood at 17-7 in favour of Connacht.

Munster got scoring underway in the second half as they crashed over in the 41st minute after a break away from a maul with hooker Danny Sheahan at the end of it. A missed conversion from O’ Connor soon followed.

It wasn’t long until Munster found the whitewash once again as substitute scrum-half Jake O’ Riordan scored Munster’s third try of the game. With just under 50 minutes gone Munster found themselves leading for the first time 19-17.

A yellow card in the 55th minute saw Connacht down to 14 men.

But it was Munster who wrapped up the game in style with a sensational try from Brian Gleeson in the 67th minute. A final conversion from Ben O’ Connor saw Munster seal the deal as they won 26-17.