Report | Munster U18 Girls Bounce Back Against Ulster 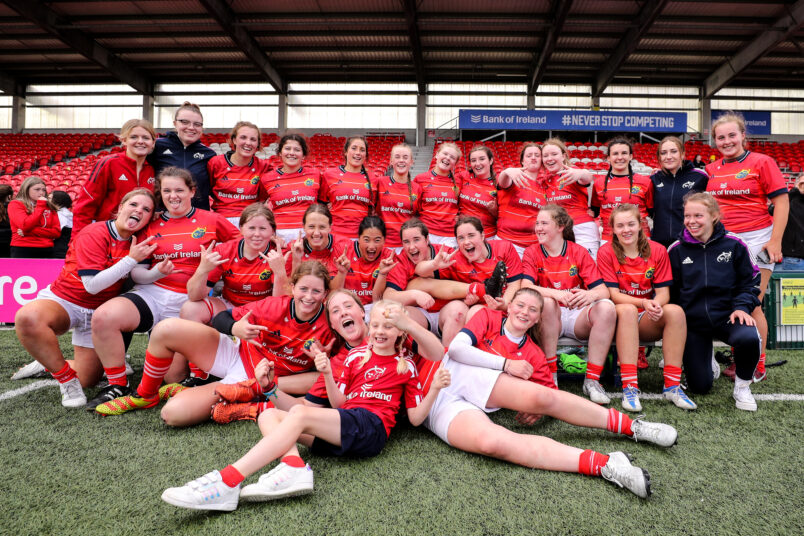 The Munster team celebrate after the game. Inpho

After a defeat in the opening round to Connacht last week, the Munster U18 Girls returned to winning ways this week as they beat Ulster 47-5.

The opening score went Munster’s way as Caitriona Finn slotted over a penalty in the 2nd minute.

An 8th minute unconverted try followed after a line break from Ellie Cournane saw Ellen Boylan crash over by the right corner flag.

Next to cross the whitewash was out-half Kate Flannery in the 12th minute.

A scrum on the 22 saw Lyndsay Clarke crash over for Munster’s third try of the game. Unconverted by Finn the score stood at 20-0 with just under 20 minutes gone.

A second try from Lyndsay Clarke followed in the 24th minute with Finn sending the conversion soaring through the uprights.

The final score of the first half went the way of Munster as Fethard’s Beth Buttimer crashed over off the back of a maul.

Running into the sheds at half time the score stood at 35-0 to Munster.

An intercept try from Ellie Cournane got the second half underway in the 44th minute.

This was swiftly followed by a try from Kate Flannery in the 51st minute as the ball was ripped from Ulster in a tackle.

A 56th minute unconverted try for Ulster saw them get off the mark but it ended 47-5 to Munster.

It was a stellar performance put on by this young Munster squad with an exceptionally dominant first half.

They face Leinster next in the penultimate round of this year’s Interpros at Musgrave Park next Saturday.