Following the conclusion of the Under 20 Interprovincial campaign in September, four additional players have been inducted into the Munster Rugby Academy.

Scott Deasy, Stephen Archer and Murray Kinsella all performed to a high level throughout the campaign and have been rewarded with Academy contracts joining Tommy O’Donnell in the first year of the programme. Paul Rowley has also been inducted into the Academy first year following his excellent pre-season form with UL Bohemians.

Scott Deasy attended Presentation Brothers College, Cork achieving honours at Munster and Irish Schoolboy levels and also the Irish U19 side that competed at the recent World Cup in Belfast. He is equally adept in the centres, flyhalf or fullback and will be an asset to UCC in the AIL this season as he studies towards a finance degree.

Murray Kinsella hails from Waterford where he studied at Newtown College. He represented Munster at Schools and U19’s level and played in the Irish U19 team in the World Cup. Murray is a centre who has joined University of Limerick Bohemians this season and studying towards a Bachelor of Arts in Media & English.

Stephen Archer from Cork attended Christians Brothers College gaining selection in Munster and Irish Schools. He also played for the Irish U19’s last season and is currently in the Irish U20 squad. Stephen is currently working towards a Food Business Degree at UCC and is representing UCC in the AIL this season.

All at Munster Rugby wish these players well in their aspiration to become a professional player. 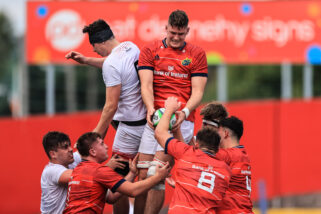