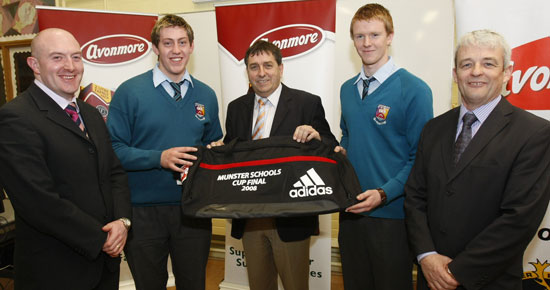 The countdown to the 2008 Avonmore Milk Munster Schools Senior Cup final has begun, with just days remaining before Castletroy College and Christian Brothers College take to the field to compete for this prestigious title.

It’s been a historic week for Castletroy, who won their first Avonmore Milk Munster Schools Junior Cup title on Wednesday, defeating Presentation Brothers College 22-15 at Musgrave Park. With the double firmly in their sights, and having already knocked last year’s champions Presentation Brothers College out of the competition by just one point in a thrilling semi final, they will no doubt have a spring in their step.

However, Cork side Christian Brothers College, having last won the Senior title in 2003, will come to Garryowen with the prize firmly in their minds. They saw off the challenge of Ardscoil Ris in the quarter final, defeating the Limerick side 13-6. CBC traveled to Clanwilliam for their semi final clash with Glenstal Abbey School and came out 18-12 on top.

The final has certainly captured the imagination of even the neutral rugby supporter, with CBC having 27 titles under their belts and a wealth of history and success in schools rugby, and Castletroy College, having been founded just eight years ago, competing in their very first Senior Cup final.

Admission to the Avonmore Milk Munster Schools Senior Cup final is €10 for adults and €5 for students. The match programme will be on sale inside the ground for €2.

Please note that there is no parking available for the general public inside the ground.

Tough Test Ahead for Irish Women