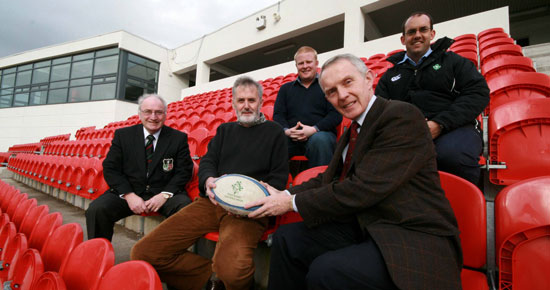 One of Cork’s highest quality club rugby pitches will play host to its first international games in March. CIT’s rugby grounds, used frequently by Munster’s professional players, is the venue for two games during the upcoming Easter U18 6 Nations Festival, sponsored by the Bowen Group.

Games between England and France and Scotland and France will take place at CIT’s rugby grounds and the only surprise about this is that more high profile games haven’t been held there given the excellent facilities on offer.
It’s fitting too that CIT joins prestigious local grounds such as the Mardyke, Temple Hill and Musgrave Park in hosting games for the highly anticipated tournament given that the Bishopstown based college has supplied many players to Ireland teams at all levels over the years from Ireland Schools up to full Ireland level.
Richard Wallace, Jack Clarke, David Wallace, Donncha O’Callaghan and Denis Leamy have been capped for Ireland and many other players have won high honours and with the best young players expected to be on show during the U18 6 Nations, hopes are high that they will soon host high quality players with big futures in the game.
The hosting of the game came about via its link-up with its neighbouring club Highfield who they joined up with in 2007 to establish unique rugby bursaries.
The student bursaries are for promising players attending the college with the holders becoming part of the new Highfield Rugby Academy.
Sponsored by BOC Gases the academy members have a full programme of weights training and nutrition and skills training available to them throughout the season and it’s hoped the programme will continue to grow year on year.
CIT Rugby Development Officer David Oliver says the chance to host a Six Nations game will give the college a perfect chance to show off their facilities and highlight the work that has been going on to make rugby more high profile on campus and beyond.
"It is a huge honour for us to be hosting two of the matches during the tournament and it is an historic moment also as the facility will be hosting rugby internationals for the first time. Highfield RFC has been extremely supportive of the rugby programmes at CIT over the past two years and the game was initially due to be held at Woodleigh Park. The gesture to move the matches, by Highfield RFC, to CIT was very generous and we are delighted to showcase our facilities."
These top class offerings include a full aerobic gym, and a full size flood-lit rugby pitch as well as access to all weather pitches for skills training.
Up and coming players to make use of these facilities at the moment include the Munster contracted quartet of Mike Essex, Dave Ryan, Darragh Hurley and Duncan Williams.
The U8 Six Nations is a first for Cork and it’s hoped hosting games at other venues like Temple Hill and Musgrave Park in different locations will attract large crowds to watch games played by Ireland and the visiting nations of England, France, Italy, Scotland and Wales.
Mr Oliver added that there were also plans afoot to promote the games being hosted in Bishopstown to encourage sports fans in the area to turn out and attend games.
"All students at the local schools will be receiving an exclusive ‘ticket’ to the matches. Although there is no entry charge to any of the fixtures, it is hoped that the ticket will help raise awareness of all of the matches over the entire festival and we’re hopeful many people will turn out. We’ll also be promoting the two matches internally and all of our students will be encouraged to come and have a look at International Rugby being played at their own sports facility. It will be a proud time for us."
Admission to all of the U18s games will be free in an effort to attract large crowds to games.
Commenting on the hosting of the festival in Cork and the recent announcement of The Bowen Group sponsorship, IRFU President Der Healy, who is part of Highfield RFC, said:
"I have no doubt that all those involved in rugby in Cork and throughout Munster will take great pleasure in welcoming the visiting teams and spectators to this proud rugby region for what promises to be a great celebration of the game we all love, played by the best young talent from across Europe."
All the festival details are available on the IRFU and Munster Rugby websites at www.irishrugby.ie and www.munsterrugby.ie