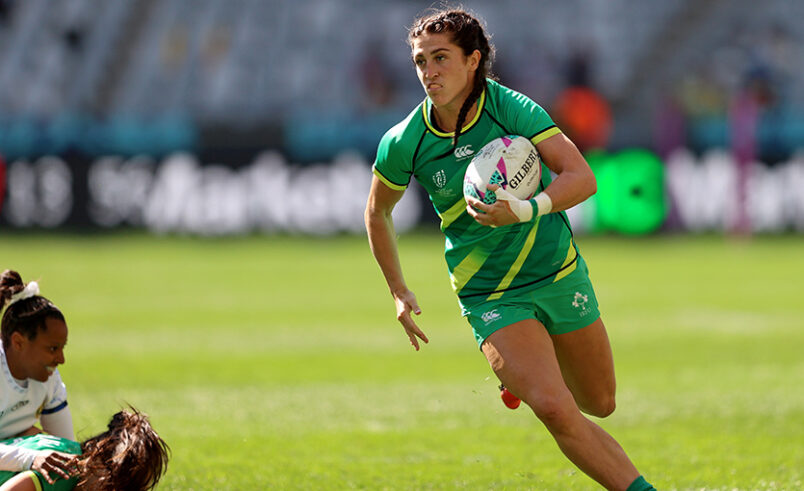 Amee Leigh Murphy Crowe and Mick Galwey were among the award winners at this week’s Guinness Rugby Writers Awards.

Ireland and Leinster flanker, Josh van der Flier and Ireland and Gloucester-Hartpury hooker, Neve Jones have been named the Guinness Rugby Writers of Ireland Men’s and Women’s Players of The Year respectively. These awards acknowledge their consistent performances throughout the 2021/2022 season for both club and country.

Van der Flier was one of the standout players as the Irish men’s team claimed a Triple Crown victory in March, along with a historic series win on the summer tour of New Zealand. Van der Flier was also consistently brilliant for Leinster, both domestically in the league and on the European stage. Jones meanwhile also enjoyed a tremendous season for the Ireland women’s team. Outstanding performances in the 2022 TikTok Women’s Six Nations, was coupled with a superb display on the summer tour to Japan – which saw her secure a hat-trick of tries in the opening test match.

The Ireland men’s team was named the Dave Guiney Guinness Rugby Writers of Ireland Team of the Year in recognition of their historic series win over New Zealand during their summer tour. The side also took home silverware from their 2022 Guinness Six Nations campaign by defeating Wales, England and Scotland to claim a first Triple Crown since 2018.

Ireland men’s 7’s star, Terry Kennedy was awarded Guinness Rugby Writers of Ireland Men’s 7’s Player of the Year for the second consecutive year, cementing his reputation as one of the best 7s players in the world. Another excellent season for Kennedy saw him pick up the Top Try Scorer title, having crossed the try line 50 times in this year’s World Series. Kennedy was in the World Series Dream Team before playing a vital role in the team’s 3rd place finish at the Rugby World Cup Sevens in Cape Town.

Women’s 7’s player, Amee Leigh Murphy Crowe is this year’s Guinness Rugby Writers of Ireland Women’s 7’s Player of the Year, the second time she has won the award in her career. The Tipperary native reached a century of tries this season while also being named on the World Series Dream Team. She played a pivotal role in helping the Irish women’s side qualify for the Rugby World Cup Sevens. Murphy-Crowe also featured for the Women’s XV side in the 2021 Autumn Internationals and the 2022 TikTok Women’s Six Nations. 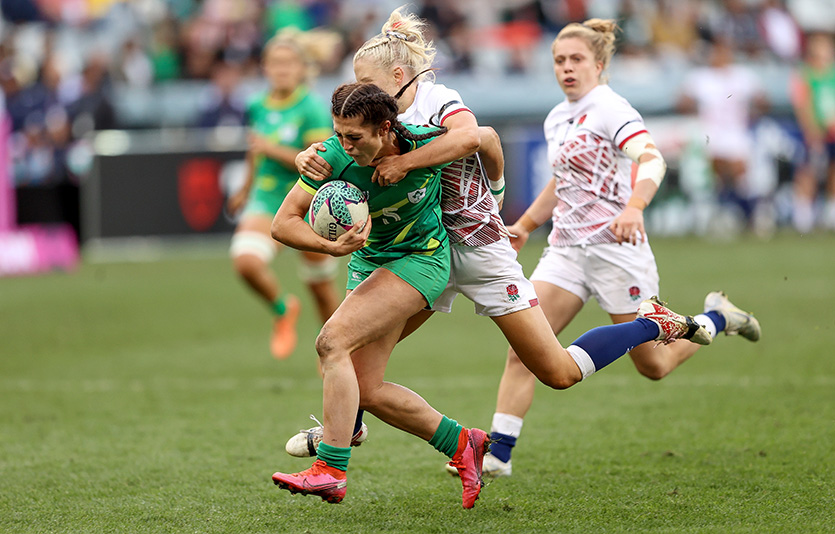 Also honoured on the night was retiring Leinster Rugby CEO, Mick Dawson who was awarded the Guinness Rugby Writers of Ireland Tom Rooney Award. Dawson has overseen a period of extraordinary success both on and off the field for Leinster Rugby. He has been at the helm for Leinster’s most successful period with the province, taking home four Champions Cup titles, one European Challenge Cup title and eight domestic league titles during his 21 years as CEO

Elsewhere, Enniscorthy RFC has been voted the Guinness Rugby Writers of Ireland Club of the Year on the back of their achievements in winning Division 2B of the Energia Men’s All Ireland League last season. With a largely locally-based squad, the Wexford club was competing at this level for the first time after winning the round robin in 2021, and won 16 of their 18 games to secure promotion.

Finally, former British and Irish Lions, Ireland and Munster rugby player, Mick Galwey and former Barbarian, British and Irish Lion, Ireland and Ulster rugby player, Phillip Matthews, have both been inducted into the Guinness Rugby Writers of Ireland Hall of Fame. Galwey won an All-Ireland Senior Football Championship medal with Kerry before committing himself to rugby, where he went on to win 41 caps for Ireland and was selected for the Lions tour to New Zealand in 1993. Matthews, meanwhile, made 38 appearances for Ireland, captaining the side on 13 occasions. He was also part of the 1985 Five Nations Championship winning team and represented Ireland at two Rugby World Cups in 1987 and 1991. 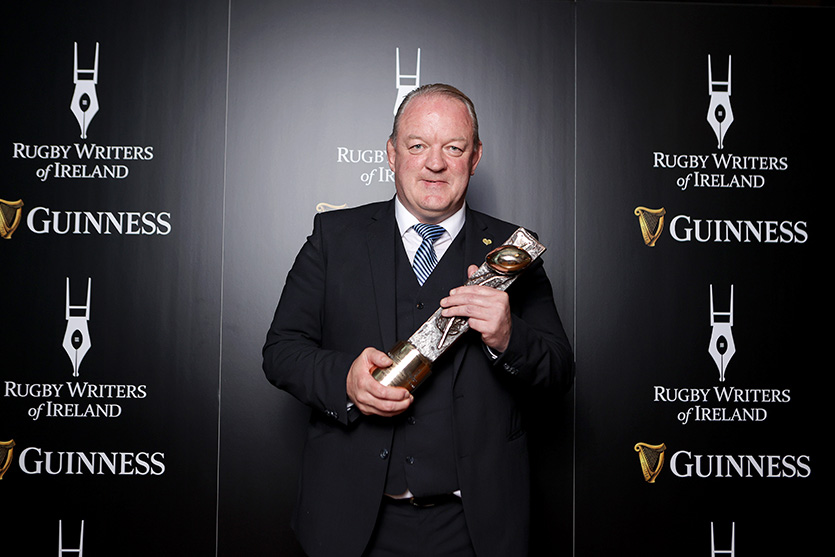 Mick Galwey is presented with the Hall Of Fame Award
©INPHO

“Guinness is proud to recognise the outstanding achievements and contributions to Irish Rugby during the 2021/2022 season. As a long-term partner of both Irish Rugby and the Rugby Writers of Ireland, it has been great to see so much success both on and off the pitch. I would like to congratulate all of those who have been honoured today by the Rugby Writers of Ireland, most of all, Josh van der Flier and Neve Jones on their tremendous personal achievements this past season. Both players showed tremendous leadership throughout, and I thoroughly enjoyed watching them on the pitch last year. I would also like to share my heartfelt best wishes to Mick Dawson on his retirement following a hugely successful tenure as Leinster Rugby CEO. On behalf of Guinness, I wish him all the best in the future. All of us at Guinness have been delighted to see the rugby community – players, fans, media and beyond – come together once again and embrace the comraderie that comes with this rugby occasion, and we are delighted to once again be celebrating days like this together.”

Rúaidhrí O’Connor, Chair of the Rugby Writers of Ireland added;

“In my first year as Chair of the Rugby Writers of Ireland, I would like to congratulate all our award winners who were nominated and voted for by members of the Rugby Writers of Ireland. 2022 was a truly memorable year for Irish Rugby, with the Men’s team claiming a historic series win in New Zealand and the Women’s team embarking on a first ever summer tour to Japan. We have also seen our men’s and women’s Sevens teams consistently perform on the world stage. It is great to be able to acknowledge these achievements and we thank each of our award winners for their ongoing commitment to Irish rugby. I would also like to recognise previous award winners from 2020 and 2021, who we were unable to acknowledge with a formal awards ceremony. My special thanks to Guinness for their continued sponsorship of these awards, which has spanned over two decades.”

Josh van der Flier was proud to receive the accolade;

“I am very proud to have been voted the Guinness Rugby Writers of Ireland Men’s Player of the Year. On a personal and professional level, 2022 has been incredibly special for me and it was wonderful to have our amazing supporters backing us throughout the season. All my teammates at Leinster and Ireland were equally incredible last season and I definitely would not be picking up this award without their help. I hope that we can keep all improving over the next 12 months as we look ahead to an exciting year for Irish Rugby.”

Neve Jones was honoured to receive her award;

“It is a huge honour to be named the Guinness Rugby Writers of Ireland Women’s Player of the Year. There is no doubt that this has been the most enjoyable year of my rugby career so far and to be the recipient of this award just tops that off. I was also delighted to be a part of Ireland’s historic tour to Japan and I am really looking forward to the years ahead with this team.”