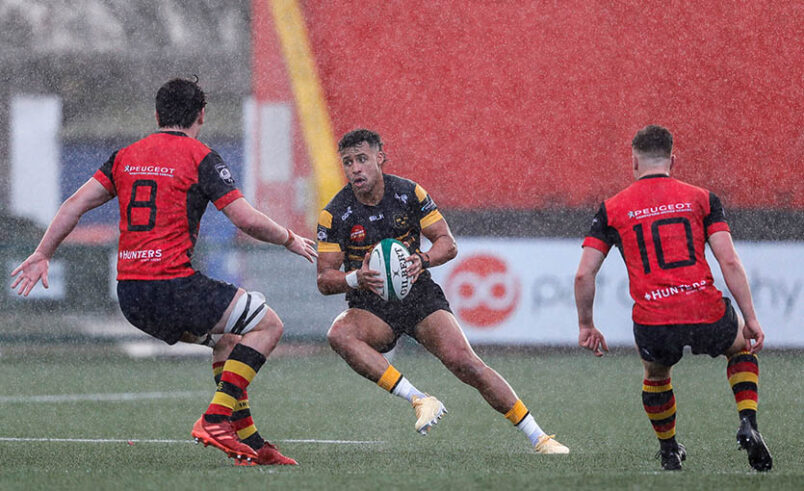 There were three Munster sides in action in the Men’s Bateman Cup and the Women’s All Ireland League while the Bank of Ireland Munster Junior Cup produced some exciting ties.

There was no joy for Young Munster in the Bateman Cup Final at Musgrave Park as they were beaten by Lansdowne who ran out deserving 46-13 winners.

Playing with the elements in the opening half the Limerick side failed to capitalise on their chances despite racing into a 6-0 lead after twelve minutes with two penalties by Evan Cusack, but some great play by Lansdowne saw them lead 12-6 at the interval.

It was all Lansdowne in the second half as they added another five tries before Conor Philips scored a consolation try for Young Munster with the final play and Cian Casey converted.

U.L. Bohemian suffered their third defeat in the Women’s All Ireland Top Four play offs after they lost at home to Railway Union 31-14. Muirne Wall and Chloe Pearce scored tries for the Limerick side and Enya Breen converted both.

Suttonians won the battle of the two unbeaten sides in the Women’s All Ireland Conference, when they travelled to Tanner Park and beat Ballincollig 34-22. Heather Kennedy scored two tries for the Cork side and Jayne Pennefather and Katelyn Fleming got one each. Denise Redmond kicked one conversion.

In the Bank of Ireland Men’s Munster Junior Cup Ennis caused another surprise when they travelled to Cobh and defeated the Pirates 6-3 in a very exciting tight contest. Sean Hayes kicked two penalties for the winners and Rory Pearce replied with one for the home side.

Killorglin looked like they might also pull off a shock in Kinsale as they led 7-5 with ten minutes to go, but the home side rallied having fallen behind to a Timmy Lynch try converted by Luke O’Shea in the opening half. Dan Horgan reduced the deficit with a try before half time and a try from Evan Wrenne converted by Sean Kingston earned Kinsale a trip to Ennis in the next round.

U.L. Bohemian had to withstand a late rally from Sunday’s Well at Annacotty before emerging 16-12 winners and a home tie against Skibbereen in Round Three. Neville O’Donoghue put the ’Well ahead with a try which Paul Collins converted. Kelvin Brosnahan kicked two penalties and converted a try by Barry Richardson to put Bohes ahead. Eathan Ackland closed the gap to a point with a second ‘Well try. Oisin Fagan kicked a drop goal for the home side as they hung on for victory.

Kanturk booked a home tie against Cashel in the next round after their 33-19 away win at Fermoy. Brian O’Sullivan scored two tries for the winners and Denis O’Donoghue, Ronan O’Brien and Barry Sherlock got one each. Stephen McAuliffe converted four of the five tries. Jack Fox, Ian Pratt and Darren Hartnett replied with tries for Fermoy and Eddie O’Connell and Ben McCarthy each kicked a conversion.

Tralee defeated Midleton 14-12 with a try from Ben Glavin and three penalties from the boot of Seamus Lyne. Josh Deady and Niall Higgins replied with tries for Midleton and Michael White added one conversion. Tralee will now travel to St. Senan’s in the next round.

There were two exciting ties in the opening round of the Bank of Ireland Men’s Munster Junior Plate with victories for Castleisland and Youghal.

Clonmel lost at home to Youghal 13-11. A Kelvin Yellop try converted by Cillian Daly gave Youghal a 7-6 half time lead. Dean Slattery kicking two penalties for the Tipperary side. Daly extended Youghal’s advantage with a penalty before a try from Brian O’Dea put Clonmel ahead 11-10. Ten minutes from time Daly kicked Youghal’s second penalty to earn them a quarter final tie away to Scariff.

Castleisland edged out neighbours Killarney 22-21 to earn an away tie at Nenagh. Mike Cronin, Joe Sheehy and Donnacha McSweeney scored tries for the winners and Sheehy kicked two conversions and a penalty. Killarney replied with tries from Aaron jones, Paul O’Sullivan and Dave Howard and Paudie Sheahan converted all three.

In the Women’s Divisional Cup Skibbereen defeated Shannon-LIT 15-0 at Coonagh. Kate O’Sullivan and Averyl Condell scored tries for Skibbereen and Emma Connolly kicked a conversion and a penalty.