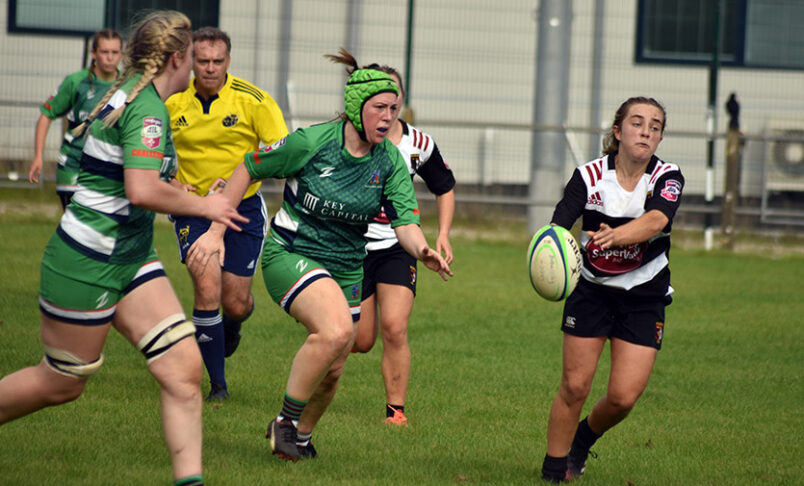 Ballincollig RFC beat Suttonians at Tanner Park on their return to the All Ireland League. Credit: Colbert O'Sullivan

Champions U.L. Bohemian began their defence of their Women All Ireland League campaign with a 46-13 win over Cooke at the U.L. Arena. Stephanie Nunan crossed for three tries, Aoife Corey two and Nicole Cronin, Louise Costello and Michelle Ring got one each. Cronin kicked three conversions.

Newcomers Ballincollig got off to a great start edging out Suttonians 14-13. Kelly Griffin was their try scorer which she also converted. The Cork club were also awarded a penalty try.

In the Women’s Division 1 League, Kerry opened their account with a 14-10 win over Tipperary at Thurles.

In Division 2 tries from Rebecca Doyle and Caoimhe O’Donnell were not enough for Waterpark who lost 19-10 away to Skibbereen and in the other game in this division, Ballincollig defeated Dolphin 46-0.

A try and a conversion by Kerry Desmond gave the home side a 7-5 interval lead, with Darragh Joyce replying with a try for Richmond. Further tries by Jerry Crowley and Matthew Crowley both converted by Desmond extended Bandon’s advantage. Eoin Hanley kept Richmond in the game with a try which Jack O’Hanlon converted but a Desmond penalty ensured Bandon’s place in the next round.

Newcastle West won the top game of the day with a 20-10 away win over Thomond. The home side opened the scoring with a penalty from Adam Guerin but shortly after Thomond were reduced to 14 following a red card. A Darragh Fox try and a penalty from Charlie O’Doherty gave Newcastle West an 8-3 half time lead. Tries from Dave Foley and Alex Halloran and a conversion by Doherty extended the visitors lead. Ritchie Ryan scored a consolation try for Thomond and Guerin converted.

Mallow bounced back from last week’s County Final defeat by Muskerry with an 18-17 away win at Clonakilty. Dave Walsh scored two tries for Mallow and Dylan Walsh one. Dave O’Sullivan kicked a penalty. Craig Bateman and Olan Dean replied with tries for Clonakilty and Mark Purcell converted both and added a penalty.

Kilfeacle defeated Old Christians 24-14 at Rathcooney with tries from Ricky Whitney and Cathal Donovan. Willie Staunton added a conversion and four penalties. Sean Kelly and Harry Fitzgerald replied with tries for the home side and Ryan O’Connell converted both.

In the other game that was played Galbally defeated Waterpark 20-7 with tries from Brendan Childs, John Kerins, Pat O’Donoghue and Paddy Donovan. Darragh Mulcahy replied with a try for Waterpark which Willie Walsh converted.

In the Junior Clubs Challenge Shield Cobh Pirates recorded a 14-0 away win over Tralee with tries from Conor McNamara and Zach Devlin. Adam Devlin and Ian Jones each added a conversion.

Fethard brushed aside the challenge of Fermoy with a 31-3 home win. Darren Prout scored two tries for the winners and Jack Kealy and Dale Murphy got one each. Josef O’Connor kicked four conversions and a penalty. Peter Clancy replied with a penalty for Fermoy.

Thurles booked their place in the last eight with a 20-11 away win at Scariff. Seamus Houlihan, Rob O’Donovan and Sam Quinlan scored tries for Thurles and Conor O’Hagan added a conversion and a penalty. Cathal Noonan replied with a try for Scariff and Luke Abbott kicked two penalties.

In the only game played in the Martin O’Sullivan Cup Bantry Bay defeated Castleisland 16-14 with a try from Phillip O’Shea and a conversion and three penalties by Cormac O’Connor.

Next week’s fixtures are –