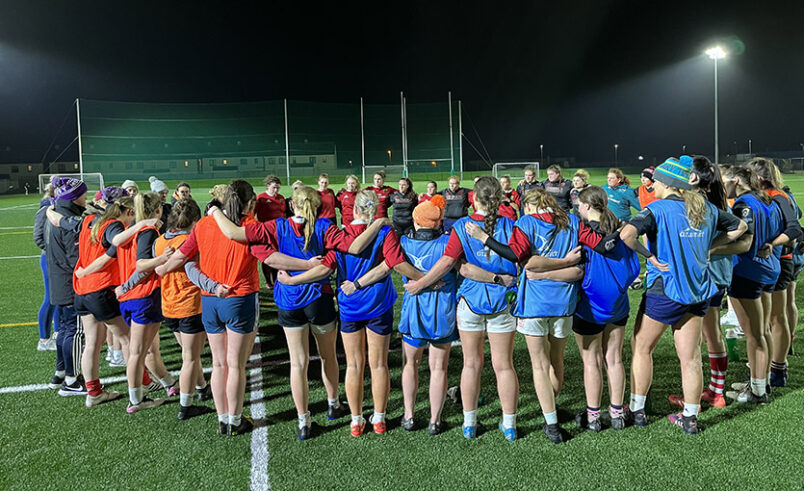 The Munster Senior Women’s team are continuing their preparations ahead of the Women’s Interprovincial Championship which kicks off in January.

The squad started their preparations last month with gym sessions while they recently undertook their second pitch session at the Munster Rugby Regional Centre of Excellence at Fethard Town Park.

As the players are in the middle of their club season, the squad assembled in Fethard during a down week of the Women’s All Ireland League.

Munster, who won the Interprovincial Championship last year, have included plenty of young players in their squad, many of whom recently played for the competitive Munster U18 Girls sides over the last two seasons.

As assistant coach Fiona Hayes explains, this is something which she and the rest of the coaching staff are extremely excited about.

“There’s a big group. The U18s in Munster has been really competitive in the last number of years and we see this now with the girls being able to step up to the physical level of the adult game.

“There’s a good mix and some of the older girls are still knocking around and they’re helping them through each session.”

Sarah Quin, who captained Munster to Interpro success last season, described the training schedule that the players have been undertaking.

“A lot of us have been playing club but in our download weeks we have been doing Munster sessions. We’re back in the gym twice a week as a group but every month we have one session but now we’re ramping it up to get ready for our Interpros.”

Head coach Niamh Briggs is buoyed by the togetherness of the squad which is reflected by the fact that injured players are attending training.

“For me, the big thing is that players that are injured at the moment are still coming down to training and they’re still connecting to players that they mightn’t have seen or they don’t play club with. It’s brilliant, it’s just been a great start for us.”

Anna Kate Cournane, who is stepping up to the Senior Women’s squad this year after recently representing the Munster U18 Girls, describes her inclusion as “a dream come true.”

“The people you’ve been watching on TV you’re now training with, it’s just a dream come true. The coaches are all top-class and they can bring more out of you than you thought you ever had.

“They’re so motivational. The conditions you’re working under in the High Performance Centre, it brings you to the next level.”

Hear from Niamh, Fiona and Anna Kate below.