U18 Six Nations Festival is Launched 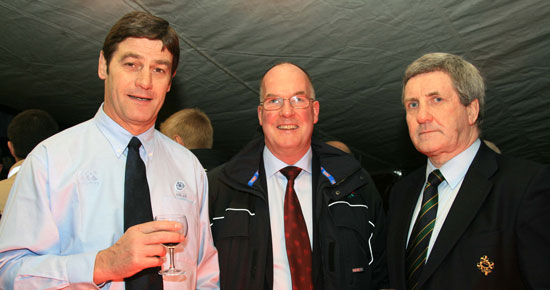 The U18 Six Nations Festival, sponsored by the Bowen Group, has been launched on board Irish naval ship the ‘Le Roisin’ in Cork city.

The festival, which gets underway with games on Wednesday evening, will see some of the best young players in Europe battle it out on local Cork pitches over the next week where admission to every game is free.

Venues during the tournament include Musgrave Park, Cork Institute of Technology, Temple Hill and the Mardyke and the teams will be based locally in areas such as Ballincollig and Crosshaven as well as in the city itself.

Captains and managers from every squad taking part were also present.

The IRFU was chosen as this year’s hosts for the U18 Six Nations Festival shortly following last year’s inaugural and successful event in Glasgow. Planning has been ongoing ever since under the stewardship of Tournament Director Diarmuid Kelly and Tournament Manager Olly Hodges and it is hoped that large crowds will turn out and support the games which will feature some tough games between top teams at this level.

IRFU President Der Healy extended a warm welcome to all of the teams to his home city.

"It’s an honour for me to be here welcoming the teams to Cork. Whatever happens over the course of this festival my main hope is that the players taking part in the festival continue their rugby careers at whatever level is right for them in the years ahead and that they take home happy memories of their time here this week."

Tournament Director Diarmuid Kelly said he was delighted to welcome each team to Cork and was certain that some stars of the future would be on show over the coming week.

"This age group is the first step on the ladder to senior international rugby. From among these players will come the stars of the future and it doesn’t take long before they reach that level. Think of Irish and international players who have come through age grade rugby and shone at senior level in a very short time. Players such as our own Ronan O’Gara, Donnacha O’Callaghan, Denis Leamy, Brian O’Driscoll and Danny Cipriani of England, as yet only 20 years of age, readily come to mind."

With admission to all games free of charge he encouraged local rugby fans to come and support the teams during the week.

"In the words of the Six Nations Age Grade Committee Chairman, Malcolm Gillies – this festival is about developing age grade rugby in a competitive environment, but is also about ensuring all involved enjoy and gain from the experience, forming new friendships on the way, and leave having experienced the fellowship of rugby."

The first games take place this Wednesday when England play Italy at Temple Hill, France play Scotland at CIT and Ireland kick of their fixtures against Wales at Musgrave Park.

U18 Squads for the Six Nations Festival.