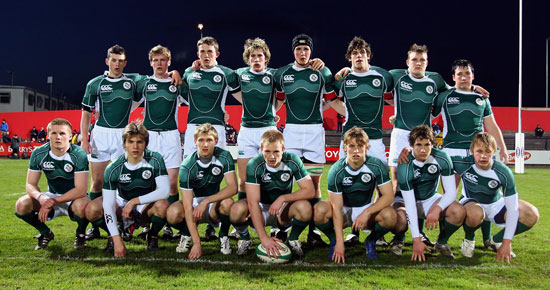 Wales put hosts Ireland to the sword in front of a large crowd at Musgrave Park on Wednesday night.

In front of around 2,500 people, Welsh kicker Matthew Jarvis scored 20 points for his team as they put in a fine performance in their opening game.

Wales got off to a good start as breaks from centre Ben John and Ieuan Coombes put Ireland under pressure out wide and those early inroads were turned into points when Matthew Jarvis put over a simple early penalty.

It got better for the visitors when scrum-half Rhys Downes finished off a fine move of free flowing rugby to touch down minutes later and a touch-line convert from Jarvis put Ireland on the back foot.

Noel Reid replied for Ireland with a well struck long range penalty on the 20 minute mark to get his side back in the game.

Jarvis kicked his third and fourth successful shots with two more penalty efforts shortly after to push out his side’s lead.

Wales, though failed to deal with a neat kick from Diarmaid McCarthy and they conceded a penalty in front of the posts which Reid easily put over and it left Ireland trailing 16-6 at half time.

Matthew Jarvis continued his perfect kicking game when he knocked over another effort and Wales piled on the pressure with some great angles of running and strong breaks as Jarvis added another to push the lead out to 22-6.

Ireland were forced into making some hard tackles as Wales looked for further scores although Irish fullback Noel Reid was lively in attack and Luke Marshall also kept his side going forward.

Ireland had a last ditch effort to score a late try but Reid was pushed into touch just before the line.

U18 Six Nations Kicks Off in Cork