Shannon in Mourning for O’Flynn 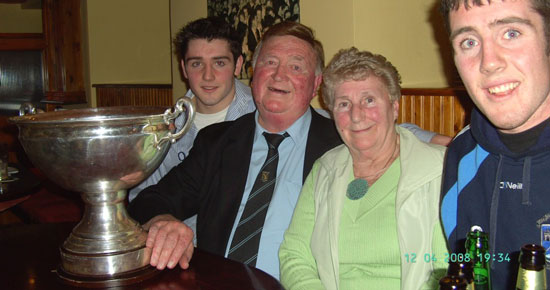 It’s with more than a tear in my eye that I write about the passing of Frankie O’Flynn. It’s with a heavy heart and a deep sense of loss, but tinged with more than a sense of pride in the memories Frankie has given all of us over the years

A piece of Shannon Rugby Club died on November 21st in Milford Hospice. Frankie O’Flynn was Shannon Rugby Club. He lived; he breathed, and swore by Shannon. After his family it was his life.
We are mourning the passing of a legend, who epitomised the ethos and traits that make our club what it is.
Frankie fought the fight as long as he could and at 77 years of age his dulcet tones will no longer linger in the dressing rooms or stands of Irelands rugby grounds.
Without equal anywhere in the World, Frankie’s "There is and Isle" resounded in, many rugby clubs throughout the country and sometimes further afield.

He will always be remembered for his rendition of the Isle. Many have tried to emulate it, but none will ever match the emotion and pure passion that Frankie projected.
There was never a more magical, emotional, spell binding place to be in as there was than a winning Shannon dressing room with Frankie leading the rowdy rabble.
"Are ye right lads" or "are ye with me". That’s how it always began, then it was always something like, "I love the bones of ye" as if each and every one of the players was his own son, and then the triumphant chorus began
"There is and Isle, A bonny Isle……"
His right hand always clinched.
"Farewell Farewell….."
the club tie he proudly wore would be taken out from under the blazer or jumper with one quick sweep, and then, as the final crescendo would finish his clinched right hand would swoop from his waist and high into the steaming heat of the dressing room like a boxer drawing an enormous uppercut. That was his way, pure and simple. No one better.

The routine varied little when his audience was the thronging masses facing him from pitch side as he stood proudly beside the latest silverware which would adorn the club. Prior to his arrival to the podium, the crowd waited expectantly in anticipation of something special and without fail something special is what we got.
Oklahoma was his favourite party piece in the clubhouse after games and as the crowds thinned out, Frankie along with Violet and Ann Brown would start the sing song.
With a word for everyone who passed, he would sit opposite the president’s bar.
"Well Frankie, what do you think" after another victory. He’d tug on your forearm, pull you closer as if he were about to reveal the secrets of Fatima and say" I love them boys, there’s no one will beat ’em"
It’s hard to believe we will never hear Frankie again.

Although he will be best remembered for his singing prowess, there was much more to Frankie than the Isle and His legend doesn’t come from singing alone. Along with the other great men of past years, Frankie lead our club to senior status in 1953/54. That same year he captained the Munster junior cup winning side and also played in Shannon’s first ever game as a senior club against Highfield in October 1953.
Frankie’s life with Shannon has been filled with moments of pride, but in truth any day Frankie saw Shannon play, was a day filled with pride. However, as a player the pinnacle undoubtedly came in 1960 when he played on Shannon’s first ever Munster senior cup winning side, an event that marked the beginning of our clubs rise in Irish rugby.
It’s seemed that Frankie and the senior cup were inextricably linked over the years. As Club President from 1976 to 1978 he saw his beloved Shannon lift the senior cup and then, perhaps his proudest moment of all came last season when he witnessed two of his grandsons, Riche and Leonard Mullane receive Senior cup medals as Shannon beat Highfield in Cork. The smile on Frankie’s and Violets faces that day were a joy to behold.

"Shannon you are my pride, my only hope and glory"
If ever the words of a song summed up a man’s feelings towards his club than these are they.

Today we mourn, but in our mourning we will remember and celebrate all that Frankie has given us. His enthusiasm, his loyalty, and friendship but most of all, his pride in Shannon Rugby Football club will never be forgotten by those that have had the privilege to call Frankie our friend.

"Always true to your colours black and blue, roll along Frankie Flynn, roll along"

May you rest in peace.