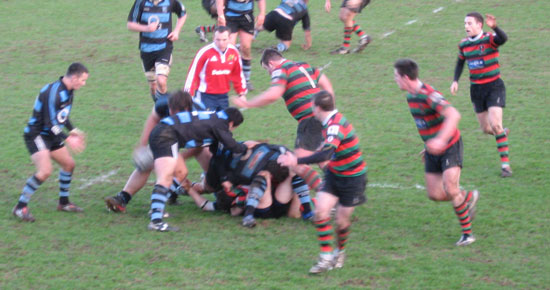 Shannon clinched the 2007/8 ODM Munster Senior Challenge Cup title in Musgrave Park on Saturday with a 12-6 victory over a determined Highfield side.

Shannon claimed their nineteenth Munster Senior Challenge Cup title at Musgrave Park on Saturday, defeating a spirited and determined Highfield, who despite coming into this game as underdogs, looked intent on causing an upset right to the end of the game. In fact, only a 79th minute penalty kicked by Shannon’s Tadgh Bennett separated the two sides as the clock counted down, with Bennett adding another penalty kick three minutes later to seal the win.

Shannon kicked off and Highfield got the ideal start- putting immediate pressure on Shannon and finding themselves within feet of the Shannon line from the opening exchanges. However, Shannon fended off this early wave of attack and cleared their lines. Highfield’s fortunes took a downturn almost immediately, with second row Aseri Koroilogavatu sent to the sin bin and reducing the Cork side to 14 men early on. Shannon claimed the first score in his absence, with out half Tadgh Bennett putting up three points after 9 minutes. Bennett added a second successful penalty kick 4 minutes later to stretch their lead. Both sides struggled to dominate the exchanges, with much of the play kept in the middle of the field and competition at the breakdown fierce. Shannon had the opportunity to add to their tally after 23 minutes when they were awarded a penalty for an offside offence, however Bennett’s effort fell just short and hit the post. As the half wore on, it was Highfield that looked to add more urgency to their play. Thirty five minutes into the half, they had a chance to score when a penalty awarded for a high tackle saw Highfield go for a kick to the corner and the ensuing lineout five metres out saw Highfield win the ball and drive for the line. However, the collision of two of their players thwarted their efforts and saw Shannon eventually clear their lines. Four minutes later Highfield had a chance to make inroads into the score when Highfield scrum half Brian O’Meara attempted a penalty kick from just inside the ten metre line, however his effort went just right of the posts and Shannon held onto their 6-0 lead at the break.

After the break it was Shannon who came out firing, upping the pace and putting Highfield on the back foot from the start. Some great work from scrum half Fiach O’Loughlin saw Shannon Captain No. 8 David Quinlan make a break up the wing, and make a sublime offload to winger Andrew Finn before he was stopped. Shannon looked to score with a quick switch in direction sent the ball out the back line, however a knock on in midfield gave Highfield some respite but hinted at the damage Shannon were capable of. Nine minutes into the second half, some scrappy play and loose handling close to Shannon line saw a frantic chase for the ball. A Shannon knock on saw Highfield get the scrum 10 metres out. Highfield made a drive for the line, and kept possession for a number of phases however an offside offence from Shannon gave Highfield the opportunity to level, with O’Meara slotting over his attempt after 52 minutes of play to get their first score of the game. Some substitutions, including the introduction of Tony Buckley and Colm McMahon saw Shannon come back with a renewed fervour. Shannon kept play inside the Highfield half until almost the 70th minute, with Highfield’s defence tested to its limits but holding firm. When play did move to the other end of the field, O’Meara levelled the scoring on 72 minutes after a penalty was awarded. Highfield looked to be on the charge again, with a terrific 30 yeard break from No. 8 Conor Hartigan put Highfield within range of the Shannon line, however a knock on halted their progress. With minutes remaining, the destination of the Cup was still very much in question, as both sides played end to end rugby. As the clock counted down, play switched to the other end of the pitch again, with a lovely chip ahead and sprint from Shannon winger Stephen Kelly forced Highfield to kick the ball in touch just 5 metres out from their line, giving Shannon a great position going into the final moments. Highfield will no doubt rue giving away a penalty for an offence in the lineout that enabled Bennett to give Shannon a 9-6 lead after 79 minutes of play. Bennett confirmed the result with another penalty kick three minutes later to seal Shannon’s win.