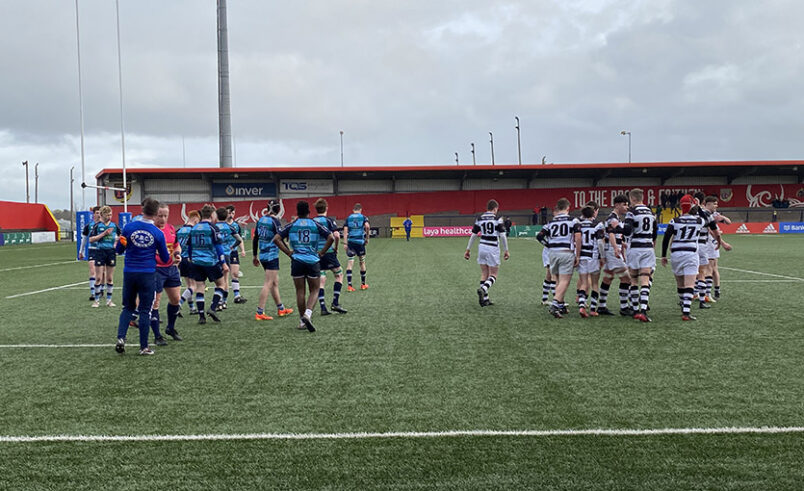 Rockwell College have secured a meeting with Bandon Grammar School in the quarter-final of the Pinergy Munster Schools Senior Cup after the Tipperary school defeated Ardscoil Rís 10-3 in their Round 2 replay at Clanwilliam FC.

These two sides played out a dramatic 24-24 draw on the back-pitch of Thomond Park last week with the Limerick school getting a try with the clock in the red to ensure a replay.

Ardscoil took the lead this afternoon when Harry Long put his side in front with a penalty after 10 minutes of the first half. This is how it remained until the break as Ardscoil took a slender lead into the second half.

Just before the halfway point of the second-half, Rockwell took the lead through a Peter McGarry try. Kian O’Reilly’s conversion ensured the Tipperary school took a 7-3 lead into the last quarter of the game.

Rockwell went further ahead with a penalty from O’Reilly and that 10-3 scoreline remained until fulltime as Rockwell now look forward to a meeting with Bandon Grammar next week.

PBC have advanced to the semi-finals of this season’s Munster Schools Junior Cup after the Cork school edged out Castletroy College 18-0 this afternoon at Musgrave Park.

It took 13 minutes for PBC to open the scoring with Harry Murphy producing a fine kick against the wind to put his side in front.

Up until that point, PBC had a prolonged period of possession in the Castletroy 22 but a huge defensive effort from the Limerick school kept them out.

Castletroy had their chances in the first half, particularly when Liam Glynn produced a superb 50:22 to give his side a huge opportunity with a lineout just metres from the PBC line. However, the Limerick school were unable to take advantage.

PBC were almost in for the opening try of the game after 20 minutes but Evan O’Dowd was tap-tackled just short of the line.

The home side weren’t to be denied, however, as sustained pressure eventually produced an overlap as James O’Leary released Mark Hetherington for the opening try of the game.

The touchline conversion was wide as PBC took an 8-0 lead into the break.

The second half was similarly a tight affair but for all of Castletroy’s possession, they never seriously threatened the PBC line.

10 minutes from time, PBC extended their lead to 11-0 with a well struck Murphy penalty.

Just moments later, the Cork school put the result beyond doubt when James O’Leary powered through the Castletroy defence before producing a deft side step to take him past the last defender and over the line. Murphy’s conversion ensured an 18-0 win for PBC.