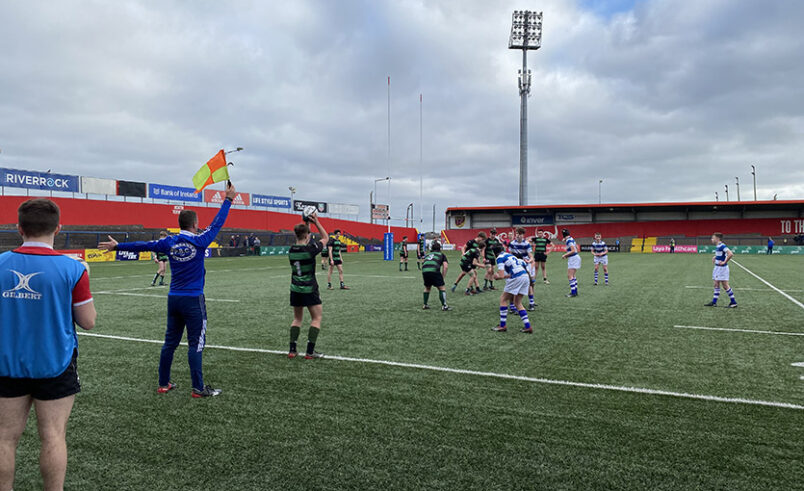 You can find a round-up of each game below.

Rockwell College are through to quarter-finals of the Munster Schools Junior Cup after they recorded a 19-17 victory over Bandon Grammar at Musgrave Park this afternoon.

The opening 15 minutes was a tight affair with both teams trying to get a feel of the game. There were a number of turnovers from both teams as it was the respective defences which stood out.

After 16 minutes the deadlock was finally broken as continued Rockwell pressure saw Muiri Lambe power through a tackle and touch down. Cian Ralph’s conversion looked to be sailing between the posts but just drifted to the left at the last moment as the Tipp side took a 5-0 lead.

Bandon started to apply pressure themselves but a penalty aimed for the corner went dead before they followed that up with a excellently executed 50:22 kick. However, on subsequent phases, the ball was knocked on.

Five minutes into the second half, Bandon’s Cash Healy broke away down the touchline where he knocked back a would-be Rockwell tackler before using his pace to cross for a try in the corner. Rory Golden’s conversion attempt was wide.

With the scores tied, the Tipperary school continued to apply the pressure and they crossed for their second try through Lambe – the centre showing excellent strength to power over from close range. Ralph’s conversion was good and Rockwell looked to have the game wrapped up when Lambe secured his hat-trick with some excellent footwork and acceleration seeing him score from a long way out.

With the conversion, Rockwell led 19-5 but a yellow card to prop Alan Jayan opened the door for Bandon as the West Cork school got a try through Paddy Coughlan. The conversion from Golden cut the deficit to seven points and there was further late drama when Nicholas Sweetnam crossed in the corner with the clock in the red.

Unfortunately for Bandon, the conversion attempt drifted wide as Rockwell secured a quarter-final clash with Crescent College Comprehensive while Bandon’s time in the competition comes to an end.

CBC secured their spot in the semi-finals of the Munster Schools Junior Cup with a 53-5 victory over Crescent College Comprehensive at Musgrave Park this afternoon.

The impressive Christians out-half, Charlie O’Shea, opened the scoring with a penalty to give his side a 3-0 lead. O’Shea was in action once again soon after as he collected an overthrown Crescent lineout to race clear and score the opening try of the game. His conversion gave his side a 10-0 lead after eight minutes.

The out-half scored his second try just three minutes later when he snuck down the blindside of a ruck close to the Crescent line. His conversion hit the post but the Cork school were 15-0 up. Christians number eight Conor Galvin got in on the action minutes later with a try from close range. The successful conversion saw the lead stretch to 22-0 before they went further ahead when Alex O’Connell was the beneficiary of an overlap as he crossed for his side’s fourth try which was converted.

O’Connell got a second after his centre partner Leo O’Leary drew in the final Crescent defender before releasing a good pass. The successful conversion saw CBC take a 36-0 lead.

Just before the break, a lovely sweeping move from Christians yielded another try as Bill McCarthy crossed under the posts. McCarthy, who took over the kicking duties from the departed O’Shea, notched the conversion to give the Cork school a 43-0 lead at half-time.

In the second half, McCarthy added two more tries which went unconverted to give CBC as 53-0 lead.

Crescent, to their credit, were much improved in the second half and they got a deserved consolation score at the end when Charlie Fenton crossed for his side’s only try.

CBC progress to the semi-final while Crescent will have another opportunity when they meet Rockwell College in the quarter-final.

St Munchin’s College advanced to the quarter-final of the Munster Schools Junior Cup after they recorded a 32-5 victory over Ardscoil Rís on the Thomond Park back-pitch this afternoon.

The Corbally school took an early 3-0 lead with a well-struck Tom Wood penalty before out-half added another give his side a 6-0 lead.

Ardscoil hit back with a try from Kieran Shvaibovich on the stroke of half-time. The conversion was wide which saw Munchin’s with a one-point lead going into half-time.

Ardscoil had a chance to take the lead at the beginning of the second half but the penalty attempt drifted wide. Munchin’s took their chance soon after when Lee Collopy crossed in the corner with Wood adding the conversion to give his side a 13-5 lead.