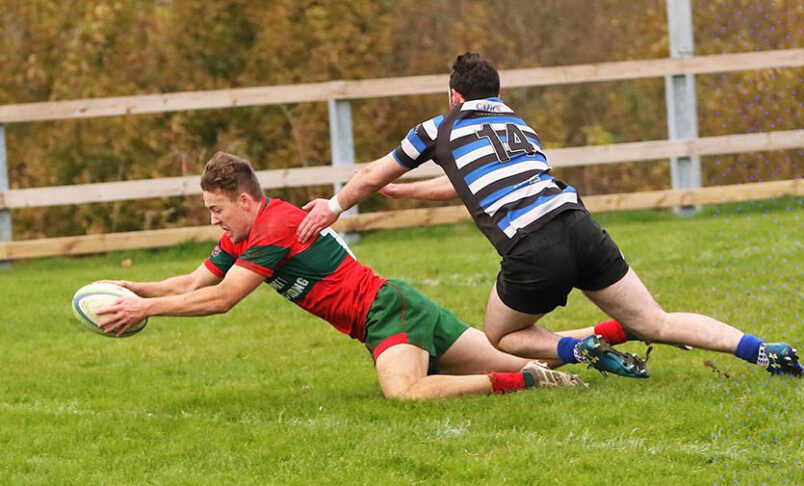 As the first phase of the Munster Junior League passed the halfway stage, the battle is on for the top four positions in both Conference A and B with just three round of games remaining.

In Division 1 of the Munster Women’s League, Kerry beat Shannon-LIT 24-15 at Coonagh. Sinead O’Connor scored two tries for the Kerry side and Maura Collins and Vanessa Dineen got one each. Laoise O’Driscoll kicked two conversions.

In Division 2, Waterpark were 38-22 home winners over Bantry Bay. Alisha Flynn scored three tries for the Waterford side. Jane Rochford got two and Lana Hogan got one. Chloe Beukes kicked four conversions.

Back to the Munster Junior League, leaders Thomond lost pole position in Conference A, after their 25-12 defeat by Richmond at the Canal Bank.

Richmond got off to a great start racing into a 15-0 after fifteen minutes. Keelan Stephenson scored a try in the opening minute and Tadgh Bennett converted. Seven minutes later Stephenson was in again for his second try and Bennett added a penalty to make it 15-0. A try from Jordon O’Donovan converted by Adam Guerin brought the leaders back into the game in the 25th minute to leave Richmond leading 15-7 at half time. Thomond were reduced to fourteen players following a red card. Bennett extended Richmond’s lead with a penalty on 55 minutes and a try by James Reeves expertly converted by Bennett made it 25-7. Thomond did score a second try late in the game with Darragh O’Neill touching down.

Clanwilliam are back in the hunt for a top four finish in this section after an impressive 24-12 home win over Galbally. Jack Quinlan scored two tries for the winners and Ben Downey and Niall Leahy got one each. Leahy added two conversions. Brendan Childs replied with a try for Galbally and Pat Shanahan converted and they were also awarded a penalty try.

A late rally by Waterpark saw them score 12 points in the final minutes to defeat Old Christians 30-26 at Rathcooney to preserve their unbeaten run.  Alex Deegan and Paul Cotter scored first half tries for Waterpark and Willie Walsh kicked two penalties and a conversion to give the visitors an 18-5 half time lead. Oscar Clarke scored a try for Old Christians. John Purcell, Chris Hartnett and Conor Kiely added further tries with John Marnell converting all three to put the home side 26-18 ahead. Late tries from Colm Power and Paddy Kiersey and a Walsh conversion earned Waterpark maximum points.

Crosshaven’s challenge for a top four finish came unstuck at Clonakilty when they lost 27-9 to give the home side their first points of the campaign. Olan Deane and Aaron Hayes scored tries for Clonakilty and Mark Purcell kicked a conversion and five penalties.

Skibbereen caused a big upset at Mallow defeating the home side 16-10 in their basement clash. Jack O’Donnell kicked three penalties for Skibbereen who were also awarded a penalty try. Rory Murphy replied with a try for Mallow and Dave O’Sullivan kicked a conversion and a penalty.

St. Mary’s defeated Dungarvan 15-8 at Grove Island with tries from Keith McManus and Gareth Moore. Jazz Pendejito added a conversion and a penalty. Jack Jacob replied with a try for the visitors and Michael Hayes kicked a penalty.

Fermoy moved up to second place after their narrow 17-14 home win over Kinsale. Eddie O’Connell, Peter Stapleton and PJ Lloyd scored tries for Fermoy and Ben Twomey kicked a conversion. Damian Kozik and Faelan Stewart replied with tries for Kinsale and Dylan Lacey converted both.

Charleville defeated Killorglin 12-5 at the Kerry venue. Eoin Carroll and Eoin McMahon scored tries for Charleville and Jessie Smith kicked a conversion. Fionn O’Shea earned the home side a losing bonus point with a late try.

Friday Deadline For Clubs To Apply For Sport Ireland Funding