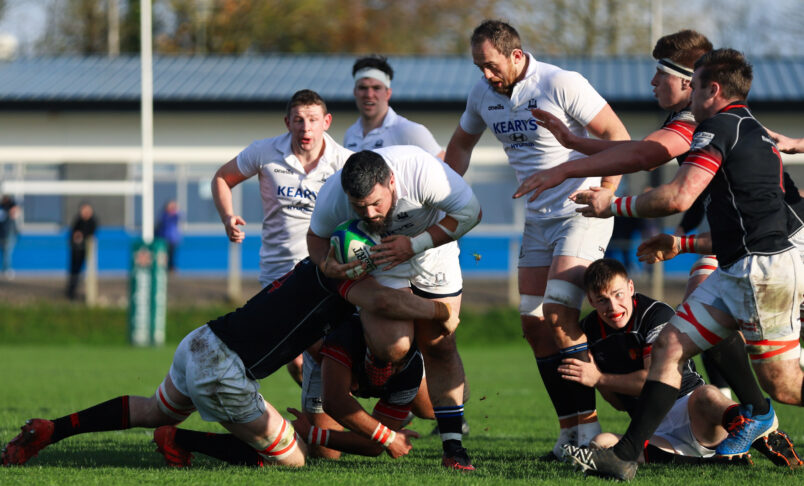 There are also two local finals down for decision in South Munster and there is also action in the Munster Women’s League this weekend.

In Division 1A of the All Ireland League, Cork Constitution travel to the capital to take on Lansdowne at the back pitch of the Aviva Stadium.

Garryowen are also in Dublin as they meet Dublin University at College Park.

Highfield will be looking to make the most of home advantage count in their bid to reach the top flight for the first time in their history, as they lock horns with St Mary’s College in Division 1B at Woodleigh Park.

Shannon travel to Dublin to take on Old Wesley at Energia Park.

The Women’s All Ireland League continues, with both Munster sides looking to maintain their unbeaten starts to the campaign.

Defending champions UL Bohemian will be looking to make it two wins from two following their comprehensive 46-12 home win over Cooke, as the travel to Galway to take on Galwegians.

Newcomers Ballincollig, who recorded a narrow 14-13 home win over Suttonians, make the long trip to Belfast to take on Cooke.

In the quarter finals of the Munster Junior Clubs’ Challenge Cup, Bandon, who defeated holders Richmond 24-12 in their opener at Old Chapel, travel to Tipperary Town to take on Clanwilliam.

The winners will have home advantage in the semi finals against Mallow or Galbally, who meet in North Cork. Mallow recorded a narrow 18-17 away win over Clonakilty in their opener, while the County Limerick side ran out 20-7 home winners against Waterpark.

Newcastle West, who defeated Thomond 20-10 at Liam Fitzgerald Park, welcome Crosshaven to West Limerick. The winners will be away to St Senan’s or Kilfeacle, who meet at Jimmy Slattery Park. The Premier County side defeated Old Christians 24-14 at Rathcooney last time out.

Cobh Pirates, who put up 14 points without reply against Tralee in the Kingdom in their Munster Junior Clubs’ Challenge Shield opener, are on the road again this weekend. They travel to the Premier County to take on Thurles, who ran out 20-11 away winners over Scariff. The winners will be rewarded with a home tie in the semi-finals against Kanturk or Ennis, who meet at the Duhallow venue. Kanturk came from behind to defeat Mitchelstown 20-10 in their North Cork derby, while Ennis put up 19 points without reply against Dungarvan in West Waterford.

Ballincollig, who ran out 35-0 away winners over Waterford City, lock horns with Kinsale at Tanner Park. The winners will be away to St Mary’s or Fethard, who meet at Grove Island. The South Tipperary side recorded a 31-3 home win over Fermoy in their first round tie.

In the semi-finals of the Martin O’Sullivan Cup, Bantry Bay, who recorded a narrow 16-14 home win over Castleisland in the opening round, travel to Castletreasure to take on Douglas. Youghal and Killarney go head to head in the other tie in East Cork.

Cork Constitution and Mallow lock horns in the Dennehy Cup decider at Woodleigh Park on Friday evening and the Temple Hill Club are also in the Muskerry Cup decider, where they meet Ballincollig at Ballyanly on Sunday.

In Division 1 of the Munster Women’s League, Kerry, who recorded a narrow 14-10 away win over Tipperary, will be looking to make it two wins from two as they entertain Shannon-LIT in Tralee.

Skibbereen, who ran out 19-10 home winners over Waterpark in their opener in Division 2, travel to Annacotty to take on UL Bohemian.

Dolphin, who began the campaign with a heavy defeat against Ballincollig, go in search of their first points as they travel to West Cork to take on Bantry Bay.