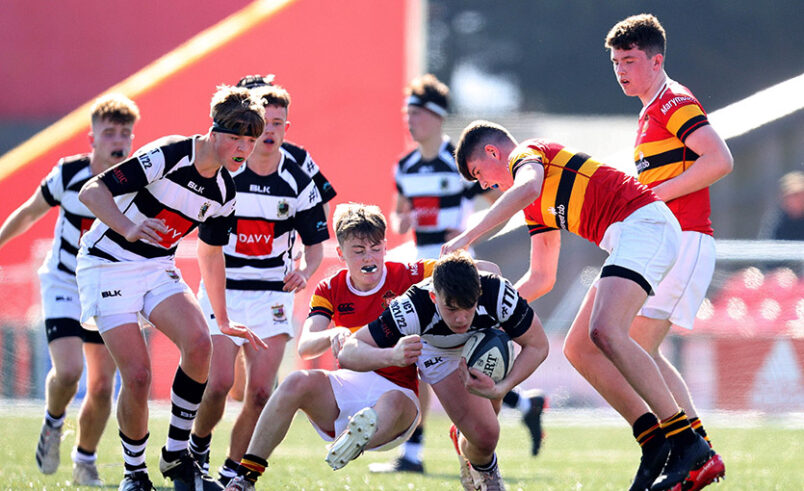 PBC got off to the perfect start when captain Rory Moloney scored the opening try of the game. The number eight was able to power through a tackle to cross close to the posts. His try was converted by out-half Harry Murphy as PBC took a 7-0 lead.

Neither side were able to dominate in the 10 minute period after that opening try with both defences firmly on top. CBC and PBC were able to produce turnovers at vital times.

However, CBC were able to get back into the game when Daire O’Callaghan crossed out wide but unfortunately for Christians, out-half Charlie O’Shea’s conversion was wide from a difficult angle.

PBC had an opportunity to extend their 7-5 advantage but Murphy’s penalty attempt was wide of the posts.

Jus before half-time, CBC almost took the lead but Calvin Kilbride’s pass couldn’t find O’Callaghan as the try-scorer knocked forward before the referee blew the whistle to signal half-time.

Six minutes into the second half, CBC’s Murphy had a chance to put his side into a narrow lead but his long-range penalty from 45m out went wide of the posts.

Entering the final quarter, PBC struck a hammer blow to CBC when they moved the ball well through the hands which allowed Eoin Hurley to touch down in the corner. Murphy produced an excellent touchline conversion to give his side a 14-5 lead.

CBC almost got back into the game but Kilbride was tap tackled by Murphy just inches short of the line. The tackle saw Kilbride spill the ball forward as PBC got the put-in to the scrum 5m from their own line.

CBC did get that second try a few minutes later when number eight Conor Galvin produced a powerful carry off the back a CBC scrum. O’Shea was wide with conversion which reduced PBC’s lead to 14-10.

However, CBC ran out of time as PBC were crowned the 2022 Munster Schools Junior Cup champions.