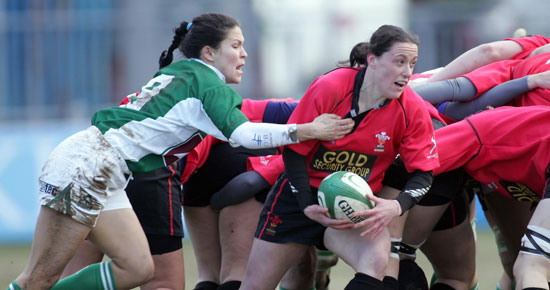 Cobh native John O’ Sullivan has taken the reigns as National Head Coach for the Women’s International team, and with the Six Nations looming, he has named his 36 player squad from which the test team will be chosen.

Over the last number of months, John has been involved in an intensive consultative process with the provincial coaches, analysing the recent interprovincial series, as well as holding sessions with last year’s World Cup squad before naming a training panel that includes the 22 from the World Cup squad and 14 new faces. The squad meet for their first official session this weekend in Malahide RFC in Dublin.

A Level 2 accredited coach since 2004/5, John comes into the role having recently assisted Stephen Forde with Highfield RFC’s AIL team. From 2002 to the end of last season, John was Club Coach with Cobh Pirates RFC to great success. During his playing career he represented Munster twice on the Munster Junior team, and was Club Captain of Cobh Pirates for seven years. While still playing he began coaching in the club- assisting various first team coaches before taking over a Club Coach. He has also been Club Chairman of Cobh Pirates. During his term as Club Coach, the club’s first and second teams won thirteen competitions between them, including the County Cup and the Munster Junior Cup for the first time in the club’s history. They also reached two successive Munster Junior League finals.

With the Six Nations due to kick off against Wales next month, John is looking forward to the challenge: "It’s an honour to be involved with the national team, and I’m really looking forward to the challenge of taking the team to the next level. I have been hugely impressed with the commitment and the dedication that the squad have shown so far and am relishing the opportunity of working with them. The way I look at is it that they are rugby players representing their country and it doesn’t matter if they are male or female. There is a lot of quality in this Irish side and I can see what heights they are capable of. These are high quality players with lots of ability and in the short term it’s about maximising what we can do with the players. Long term yes I would like to look more at upping again their fitness programmes and their conditioning but I’m looking at the Six Nations now. We have a lot of players who haven’t had much involvement in the national set up at all so it’s good for them to be exposed to this level. Personally I love to see players improve and that really is why I coach. Coaching at an amateur level as well gives you huge satisfaction as there is scope to see players get better and better so I hope that is something I can achieve with this group. At the end of the day it is players who judge if you are good enough are not and that is the challenge ahead."

Living in Cobh and married to Catherine, the couple have three children- Rachael (19), Maria (16) and Richard (14).

When not involved in all things rugby, John can be found at Diamond Shipping Services Ltd., a company of which he is co owner and Managing Director. Dealing mainly in freight logistics, warehousing and transport, the company has offices and/or warehousing in Cork, Limerick, Dublin and Rotterdam, employing 48 people in total.