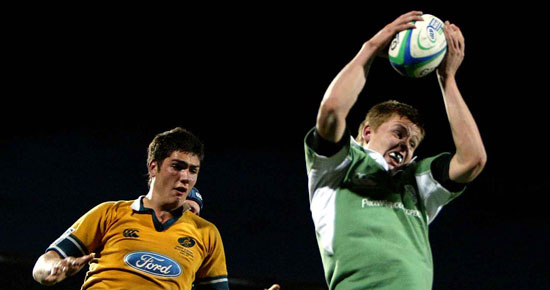 On Monday evening last at Ravenhill, Ireland had a dramatic one point victory over Scotland. Ireland came from behind to score a vital late try and chalk up their first win at the IRB Under-19 World Championship. Four Stephen McColl penalties had Scotland in pole position but the hosts heaped the pressure on, got the touch down through Eoin O’Malley and Scott Deasy’s conversion won it 13-12. Along with the conversion, PBC’s Scott Deasy also kicked two penalty goals.

Munster Schools Players in U18 Six Nations in Scotland

Ireland U18 Schools defeated Italy in their opening game of the U18 Six Nations on a score line of 22-5 last Sunday in Glasgow.

The management team also includes some familiar names from Munster Schools Rugby- with Peter Melia coaching the side, and Paul Barr on board as Assistant Coach.

Prior to their departure for Glasgow, the side played a friendly warm up match against the Japan U19’s recently, with the home side emerging 32-14 winners.

Four Munster players featured in the FIRA U18 Championship squad that were narrowly beaten by France in the final of the competition last weekend in Biarritz.

The Irish Youths team defeated Georgia 26-0 in their opening game on 1st April and went on to defeat England 10-7 on April 4th, setting up a final with host country France. With the sides locked at 3-3 at half time, Ireland took the lead ten minutes into the second half with a try from Naas full back Eoghan Conron. As the game reached its closing stages, the French kept the pressure on through a succession of penalties near the Irish line. With only two minutes remaining and the championship almost in Ireland’s grasp, France managed to dramatically score from close range to level the scores. The conversion was missed and the final whistle blew – ending the game in an 8-8 draw. With no extra-time in this tournament, the game went straight to penalties and in the most difficult of circumstances, Ireland were edged out 4-3.

The four were also capped for Irish Youths on the 18th March last in Glasgow against Scotland in a warm up International in preparation for the FIRA European championship.