Munster Young Guns Off to a Flying Start 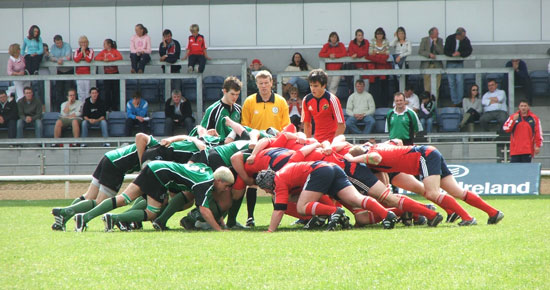 Both the Munster 19 Club team and the Munster U20’s got the perfect start to their interprovincial campaigns last weekend, both defeating Connacht away on scorelines of 36-0 and 18-10 respectively.

The Munster U19 Club team got off to a perfect start in their Interpro campaign with a 36-0 win over Connacht in Galway on Saturday.

Despite playing into a strong breeze and having to absorb some early Connacht pressure, Munster got the all important first score through centre Danny Barnes who crashed over after some early good work close in by the forwards. Ronan O’Mahony picked up Munster’s second try mid way through the first half after a well worked back row move, with Conor Murray adding the extras with the conversion. On the stroke of half time Murray went over under the posts to score his own try after he intercepted a Connacht pass just outside the opposition 22. He subsequently added the conversion to leave the half time score Connacht 0 Munster 19.

A penalty kick early in the second half from Conor Murray increased Munster’s lead to 22-0 and two further tries from Dave Twomey and a second try for Danny Barnes which were both converted by Murray made the points safe. Particularly pleasing for Head Coach Tommy Crowe, was that that all seven subs were used from the bench.

Next up is a home fixture against Leinster in Musgrave Park on Sunday at 2.30pm. The team and management would like to thank the loyal supporters who travelled to Galway on Saturday last and look forward to their support on Sunday.

The Munster U20’s set the winning tone for the weekend with their win over Connacht at the Sportsgrounds on Friday night last. Tries from Kieran Essex, Sean Scanlon and Scott Deasy, with a penalty from Andrew Burke gave Munster the edge in this closely fought contest.
Munster led 8-5 at the break after Stanley Hayes got the first of his two tries for Connacht, with Sean Scanlon crossing for Munster and Scott Deasy adding a penalty.
A second try from Connacht hooker Hayes in the second-half was not enough to secure victory as Munster added tries from Deasy and Kieran Essex to decide the issue.
Munster host Leinster in the next round, who come to Cork on the back of last weekend’s 15-5 defeat to Ulster.