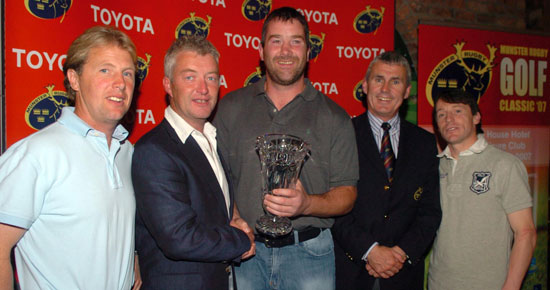 Two well known figures from the world of horse racing shared a victory of a different kind at the 2007 Munster Rugby Golf Classic at Dundrum House Hotel.

score in the annual event, finishing on 52 points and narrowly beating the Highlifters team of Vincent O’Flaherty,

Jim Tobin and Con Kelleher. The winning team were presented with their prizes by Munster’s Anthony Foley

and John Hartery, Chairman of the Munster Management Committee.

Now in its seventh year, the Classic returned to the magnificent setting of Dundrum House Hotel, where the very

first competition was held. Due to unprecedented demand for places, for the first time the Munster Rugby Golf Classic was

held over two days this year, with separate prizes for each day and a prize for the best overall score, all sponsored by

Heineken Ireland. Munster Rugby were delighted to welcome Polaris World on board as Event Sponsor, with the

Irish Examiner continuing their support of this fundraising event as Media Sponsor.

and Dominic Macken came in third on 49 points. On their heels were Ron Lehane, Tim Deasy and Richard Deasy of

Timberland and Dave McHugh, Alan Rowe and Eddie Walsh of Team McHugh. The longest drive was won by Ron

Lehane of Timberland, with his team mate Richard Deasy winning the Nearest the Pin competition on the 6th hole.

On Friday, with the Dundrum House Hotel team and Highlifters in a close finish on 52 points apiece, they were followed

by the Mahers Sports team of Tom Maher, Niall Maher and S. Birmingham on 50 points. In third place came 4Imprint

on 49 points, followed by Mardyke Arena and South East Scaffolding. The longest drive was won by Bruce Wood of

Munster Coach Declan Kidney lent his support by participating in Thursday’s competition, and he was also on hand

at the evening formalities to present the day’s prizes. On Friday, Munster’s Anthony Foley and Shaun Payne also

competed in the event.

Sesimbra in Lisbon in Portugal (October 5th – 12th 2007 which was kindly sponsored by Munster Sports Travel.

Colm O’Brien who played on the Clarion Hotel team was the winner of this fantastic prize.

All funds generated at the Munster Rugby Golf Classic will go towards the development of Youths Rugby in the province.