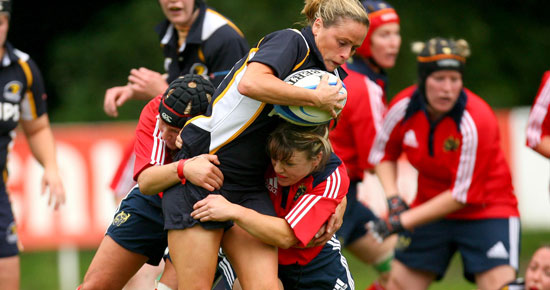 It’s not all about the Senior men’s side this weekend as the Munster Women’s team travel to Belfast also, to take on Leinster in the Inter-Provincial Final. With both matches taking place on Saturday it is an ideal opportunity for any travelling Munster Supporters to show their support for both Munster Teams.

The Munster Women’s Team are in their final preparations for this weekend’s all important Inter-Provincial Final against Leinster at the Northern Ireland Civil Service Sports Pavillion in Belfast.

To date this season they have been undefeated and are currently aiming to retain the Inter-Provincial Title for their third consecutive season.

The 3rd and 4th place play-offs see Ulster take on Connacht in what will also be an entertaining match.

But it will be all eyes on the final when the Munster Women look to build on their previous performance against Leinster in what should prove to be a close and hard fought battle. Munster defeated Leinster 14-10 earlier in the campaign.

It is evident when speaking to Coach Fiona Steed that she is looking forward to the match following the team’s hard work over the past number of months. "I am delighted with the level of commitment shown by our entire squad since we started training on July 12th. We have a large squad of 32 players and each of them has contributed to what have been highly intensive and competitive training sessions and made squad selection very challenging."

In the opinion of team captain Eimear O’ Sullivan, the Interprovincial campaign is a good chance for new players to come through and get a chance to play at a higher standard for a few months at least. She also added that "this year sees a large number of new faces in the Munster set up and along with the oldies we’re all gelling really nicely and the young guns have really stepped up to the mark."

It is the public conception that the standards of women’s rugby is rising year on year and Fiona echoed these thoughts:
"The Interpro championship this year has been of a very high standard and we have had to work very hard for each of our victories to date. We are now in the position that we set out at the start of the season and that is with the opportunity to defend our Interpro title next Saturday. Looking ahead to the final I anticipate a fierce battle with Leinster as there has only been a score between us on each of the last two occasions that we have played."

Fiona added finally, "I would urge all Munster supporters who are heading North for the men’s clash to head up a little earlier and lend your support to the women of Munster who are aiming for their third Interprovincial title in a row."