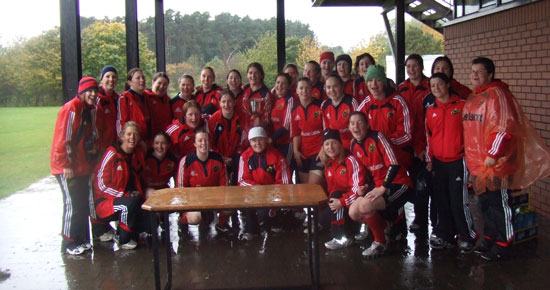 It was three in a row for the Munster Women as they defeated Leinster on Saturday last in Belfast to retain the Interprovincial Title.

In wet and windy conditions Munster and Leinster Women’s Senior Representative Teams contested for the IRFU Inter-Provincial Title on Saturday last at the Civil Service Sports Club in Belfast. It is the third time in as many years that these two teams have met in the finals and once again it was a close and hard fought encounter.

It was 25 minutes into the game before the score line was opened, following a great break by Munster. Unfortunately the wet conditions caused a knock on leading to a Leinster scrum. The Munster "never give up" attitude was clearly evident in this first try of the game when number 6 Paula O’ Connor was quick to break from the scrum and block down Leinster’s outhalf Julie Craig. Paula was again quick on her feet to pounce on the loose ball putting Munster in the driving position. Munster’s on form kicker throughout the season, pulled the kick slightly to the left of the post in what was very windy conditions.

Leinster came back at the Munster girls hard and strong as was to be expected with scrum half Tania Rosser sniping at every oppurtunity and Grace Davitt trying to breach the Munster backline, however, the Munster defence was resolute with Marie Barrett, Lynne Cantwell and Patrique Kelly putting in some major hits. The two second rows, Deirdre Scannell and Kate O’ Loughlin drove the Leinster girls back at the breakdown with a huge work rate around the pitch.

Minutes before half time, Munster out half, Helen Brosnan, made a break up the pitch and was tackled just short of the Leinster 22. Quick ball by scrum half, Lousie Beamish, and excellent hands by Lynne Cantwell set full back Niamh Briggs away outside the Leinster defence and in for Munster’s second try of the day. Again with the adverse weather conditions, the conversion was pulled wide and Munster went in at the break leading 10-0.

With the wind behind them in the second half, Leinster came out hard and strong and looked to penetrate the Munster defence but every wave of attack was met by a resilient Munster red wall. Munster continued to dominate the second half as the first with the back row covering huge ground and winger Sarah Jane Cody looking dangerous in attack until the dying minutes of injury time when a there was a small consolation from Leinster. A Leinster lineout deep in the Munster 22 saw Yvonne Nolan drive over for their only try of the game. The final score was Munster 10-Leinster 5.

Captain Eimear O’ Sullivan was presented with the IRFU Women’s Inter-Provincial Cup by IRFU President John Lyons. This is Munster’s third consecutive year winning this prestigious cup and even more impressively have done so undefeated in three years. This is a testament to the hard work and commitment put in by the Munster Management and players and we look forward to this continuing in the future.