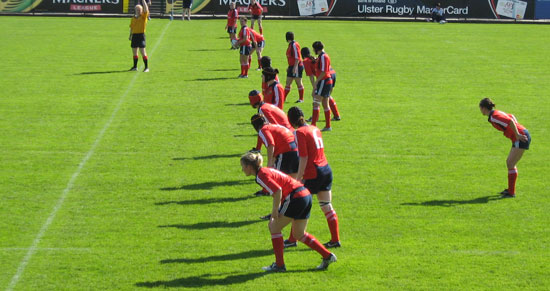 On Saturday last the Munster Women’s Rugby team, cruised to victory over their Connacht counterparts. On a day that was ideal for rugby, the Munster women made it three for three victories in this year’s Interpro Series.

Winning the match by 40 – 0, the Connacht ladies fought hard till the final whistle but couldn’t manage to penetrate an excellent Munster defence.
The first half saw tries from winger Nicola Aherne and outside centre Lynne Cantwell. Once again the exceptional kicking boot of fullback Niamh Briggs for penalties and conversions was a pleasure to watch. At the end of the first half Munster were ahead 28 – 0.
If Connacht thought that Munster would take the foot off the pedal for the second half, in preparation for next week’s final, they couldn’t have been more wrong. Within minutes from the start, Joy Neville went over for a try which was easily converted by Niamh Briggs. The young star wasn’t satisfied with showing the crowd her kicking abilities. In the 8th minute, she made a burst from inside her own half and with a spectacular hand-off, went over the line for her own try. This left Connacht with a mountain to climb and a 40 – 0 lead to Munster. Connacht held the Munster women out for the remainder of the match, only reaching the Munster 22 now and then. With such a secure lead the Munster management were able to give the entire panel a run, no doubt to show the depth and quality of the squad they have developed.
Next week-end the final, which is to be held in Belfast against Leinster proves to be an exciting battle, with Munster hoping for 3 Interpro titles in a row.

Spotlight on Kerry- Girls Rugby in the Kingdom