Munster U18 Girls to play Worcester 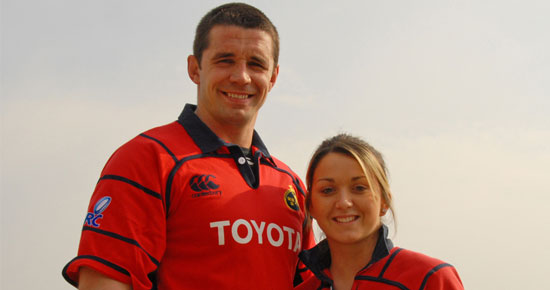 Paul said he was delighted that girls’ rugby in Munster has developed to the stage that there is now an Under 18 team to represent the province. "Its always a huge source of pride to play for Munster, but especially as Captain. From talking to Louise I know she feels the same way about it" he said.

Munster play English champions Worcester on Wednesday 4th of April in the first ever representative Munster game at under 18 girls’ level. Louise said that squad preparations are going well and the team is beginning to realise the responsibility that goes with representing Munster. "I think it is important for us to remember that we are playing for Munster and there is a serious reputation to be defended" she said. Louise is from Tipperary Town and is playing her fourth season with local side Clanwilliam.

Also on hand was Alan Quinlan, who captained Munster to their epic win over Ulster in the Magners League recently. Alan said he was delighted that Louise hails from his own home club in Tipperary, Clanwilliam. "The commitment of more and more clubs in setting up girls’ teams is now paying off with the first ever Munster Under 18 Girls’s team. This is going to do a lot for greater participation in rugby" he said.

Following the game against Worcester, the next match for the Munster girls will be against Ulster, in the first ever inter-provincial fixture at this age grade.