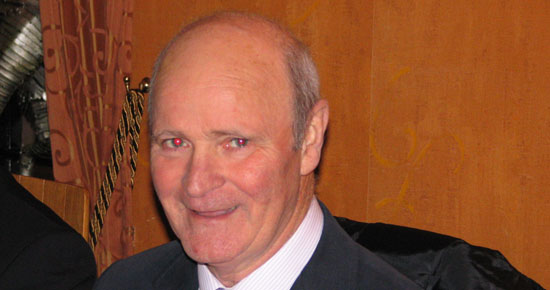 Last week signalled the end of an era when Branch Administrator John Coleman retired after thirteen and a half years service to Munster Rugby.

John has witnessed many changes during his time at the helm of domestic rugby, including the small matter of the professional staff increasing from just himself and a secretary in 1995, to over sixty people currently employed in the organisation.

Back then he recalls the highlights of Munster’s season being the 3 interprovincial matches played each year – how things have changed!

When professionalism came crashing through the old amateur doors in 1995 rugby was forever changed and on the back of this came the advent of the European Cup. John pinpoints two key appointments stemming from this which have proved to be pivotal to the outstanding success that Munster has achieved both on and off the field. The first of these was when Declan Kidney was installed as Head Coach and secondly the appointment of Garrett Fitzgerald as CEO. A management and support structure was now in place around the senior team.

When quizzed on what he thought was the most significant match for Munster in our recent history, John was quick to select the memorable semi final win over Toulouse in Bordeaux in 2000. "This once and for all proved we could compete with anyone and from then on we developed a different mindset".

He takes a different angle (and a little more time) to decide on what he perceives to be the most influential event during his time with Munster. John highlights the formation of the supporters club as an extremely significant event, stating "the Supporters Club has gone from strength to strength. It established a travelling fan base and it is from this beginning that today’s ‘Red Army’ was formed."

What really stands out for John though is the way the public has really got behind Munster Rugby and developed a level of support that is second to none. The culmination of this and all that is good about Munster was there for all to see in the recent magnificent Zurich Challenge match against New Zealand.

John’s extensive knowledge and guidance will be sadly missed by all his work colleagues as will his extremely dry sense of humour and his favourite retort – No! His wife Tina, their three children and their burgeoning crop of four grandchildren will no doubt have many plans in place to keep him busy in the coming years. We wish John all the best and thank him for all he has contributed to rugby in Munster over the years.

And as for the future, as well as continuing to follow Munster, John is dreaming of that heady day when he can celebrate his beloved Waterford winning the Liam McCarthy Cup – I’m not sure if we should hold our breath on that one John!