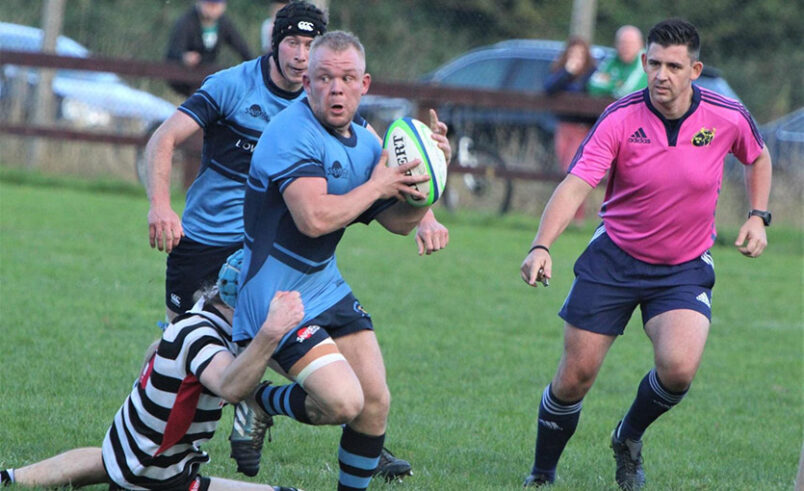 The second series of games in the Munster Junior League were played this weekend and Skibbereen are top of the table in Section A following their second bonus point win with a 27-14 victory at home to Thomond, while Fethard are the clear leaders in Section B.

While it is still early days in the season, Skibbereen will be delighted with their start to the season picking up maximum points in their home game against high-flying Thomond. David Jennings, Gavin Foley, Tom Beare, and Lorcan Carey were Skibbereen try scorers. David Shannon kicked two conversions, and Thomond replied with tries from Ryain Ahern and Ryan Hogg, with Eoghan Sherlock converting both.

Defending champions Newcastle West won the game of the day at Bandon with a 32-3 win. Cian Clohessy, Sean Ivess, Jason Woulfe, and James Corbett were penalties. Ben Ridgeway replied with a penalty for the home side.

Richmond moved to within a point of the leaders, following their 29-7 bonus point home win against Crosshaven. Brian Mullins, Darragh Joyce, Thomas O’Brien and Jeff McNamara scored tries for Richmond, and Tadhg Bennett kicked three conversions and a penalty. Adam O’Connor replied with a try Crosshaven, which Josh McCarthy converted.

A last-minute converted try for Kilfeacle saw them take the spoils at home to Muskerry with a 21-17 victory. Cillian Noonan scored two tries for the winners and Darren Lowry one, with Luke Heuston converting all three. Dan Horgan and frank Hogan replied with tries for Muskerry and Rob Cahill converted both and also added a penalty.

St. Mary’s got their first points of the campaign with a 15-14 home win over Waterpark. Keith McManus and Adam Kiely scored tries for the Saints. Jazz Pendejito added a conversion and a penalty. Rory Hannon and Darragh Hartery replied with tries for Waterpark and Willie Walsh converted both.

Clonakilty’s good start to the season came to an end; when they lost at home to Mallow 18-6. Ken Mills and Dylan Walsh scored tries for Mallow, and Dave Cogan added a conversion and two penalties.  Eoin Downey replied with two penalties for the home side.

Clanwilliam edged out Abbeyfeale 10-7 with a try from Ben Ryan, a conversion and a penalty by Niall Leahy. Jamie O’Sullivan replied with a try for Abbeyfeale which Ronan Quirke converted.

Fethard’s 18-12 away win at Ennis sees them go top in Section B. Robert Wall and Peter Wall were try scorers for Fethard and Josef O’Connor kicked two penalties and a conversion. Callum Barrett replied with a try for Ennis, who were also awarded a penalty try.

Carrick-on-Suir back in the Junior League after a few years’ absence, got their campaign off to a winning start, thanks to a last-minute try from Jack Boylan. Fionn Barry added a try, conversion, and three penalties. Fermoy replied with a try from Ian Pratt and Ben Twomey converted and added three penalties.

Galbally-Mitchelstown bounced back from last week’s defeat by Scariff, with a 20-15 home win over Cobh Pirates. Brendan Childs, Tommie Childs, and David Sheehan scored tries for the home side and John Kearins kicked a conversion and a penalty. Charlie Rasmussen and Rory Pierce replied with tries for the Pirates. Pierce kicked a conversion and a penalty.

Dungarvan defeated Scariff 20-14 with two tries from David Hickey and one by Shane Norris. Michael Hayes kicked a conversion and a penalty. Scariff replied with tries from Mark Loughran and Anthony Hallinan with Conor Burke converting both.

Charleville, Kanturk, Kinsale, and Tralee all recorded bonus points wins in the opening round of games in Section C.

Kanturk were 48-0 home winners, against Douglas. Ronan O’Brien scored two tries for the home side, and Tadhg McSweeney, Olan Daly, Stephen McAuliffe, Sean O’Brien, Barry Sherlock, and Jack O’Riordan got one each. O’Brien kicked three conversions, and McAuliffe one.

Charleville defeated Killorglin 39-3 at the North Cork venue. Jessie Smith scored two tries for the winners, and David Forde, Ivan Linehan, and Liam Barrett got one each. Cian Smith kicked four conversions and two penalties. Luke O’Shea replied with a penalty for the home side.

Tralee were 41-0 home winners against Killarney. Ben Galvin and Dan O’Connor each scored two tries and Alaister Hoban and Mikey Lyne got one each. Seamus Lyne kicked four conversions and a penalty.