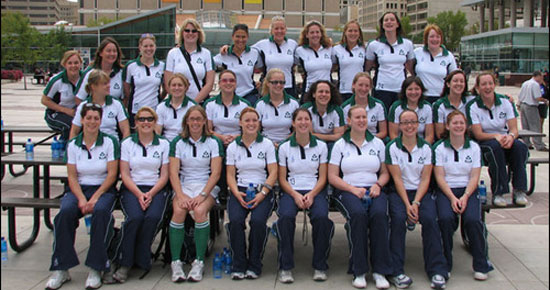 The Irish Women’s Rugby Team are in the midst of their preparations for the forthcoming Six Nations tournament which kicks off on Friday 1st February when they play Italy.

Under the captaincy of SarahJane Belton and Vice Captain Fiona Coghlan, the 26 player squad are working hard every weekend at their "home" in St. Mary’s RFC Dublin, as they look forward to their opening game against Italy on Friday the 1st of February. The current squad has an excellent balance of youth and experience with 8 uncapped players on the panel.

Their preparation was greatly helped by a training match played against a combined provinces team last Saturday – The provinces team was made up of a few experienced ex-internationals and also some young up and coming players and proved a good test for the Irish team in what was a highly competitive and hard fought game. Whilst the Irish team won the game 32-0 it was very heartening to see the strength and depth currently in women’s rugby in Ireland.

Preparation continues over the next two weekends, but alas, without UL Bohemians number 8, Joy Neville, who has suffered a knee ligament injury and may possibly be unavailable for the first two internationals. We wish her a speedy recovery.

Munster Youths and Munster U16’s in Action This Weekend