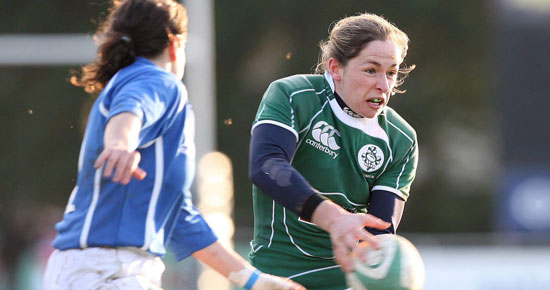 Despite one of their best ever performances in Paris, Ireland came up just short against a strong French team yesterday, with the home side winning 26-17.

Just two points separated these two teams last year and it is a measure of how far Ireland have come in recent season that they now travel to France not just hopeful but expectant when they take on a French team who are consistently ranked among the world’s top four sides.

Just ten minutes in however and the hosts had rankled Ireland with a blistering start after they scored with just seven minutes on the clock through lock Melanie Gauffine whose try was converted by their experienced skipper Estelle Sartini.

Ireland eventually began to get stuck in up front with a pack who have on successive weekends put in superb efforts and it was second row Geri Healy who equalised when she crashed over the line following a hugely impressive Irish maul. Grace Davitt converted and Ireland continued to put pressure on France up front with Healy making hard yards after she’d scored her second try in a green jersey in a week, having also touched down against Italy on the opening day.

The ever-reliable and excellent French number 8 Delphine Plantet clawed back another try for France before the break when she harried her way over the line and Sartini’s kick meant the hosts turned around 14-7 ahead.

Ireland were however still well in the game and they took confidence from knowing that they had France rattled up front but crucially they gave up another try when fullback Caroline Ladaguous skipped over for an try on 44 minutes to push the lead out to 19-7.

Replacement out half Niamh Briggs, winning just her second cap, kicked her first points for Ireland after the break shortly after with a well taken penalty and then Ulster hooker Jess Limbert, brought Ireland right back into the game when she crossed the line following another excellent and organised Irish maul. Davitt’s kick meant that Ireland just trailed by two with 20 minutes on the clock. Ireland defended tigerishly to keep themselves in the game with captain Sarahjane Belton making at least one eye catching superb last ditch tackle as France pressed hard in attack.

It wasn’t to be Ireland’s day though and after a fumble in their own ’22, the visitors conceded a try which killed the game off when winger Celine Allainmet capitalised on an Irish mistake to pounce for the score which pushed France beyond reach.

Ireland though will take many positives from this outing not least knowing they are reaching a level which had eluded them in the past and they are now hugely competitive against some of the world’s best teams. With two upcoming home games that confidence will be hugely welcome and coach John O’Sullivan said they are still extremely upbeat ahead of the visits of Wales and Scotland. "We are disappointed with this result because we really were well in the game. We scored two good tries through our hard working pack but what was out undoing was our conceding of tries at crucial times. We gave away a couple of soft tries, one right after we’d scored ourselves, and it’s something we will look at. I was happy with the work ethic of the team and our bench made a big impact against a very good French side. France are athletic and highly skilled but we know they were there for us today and not to get a first win here is definitely disappointing."

In other games England smashed Italy 76-6 while Wales beat Scotland 23-6.