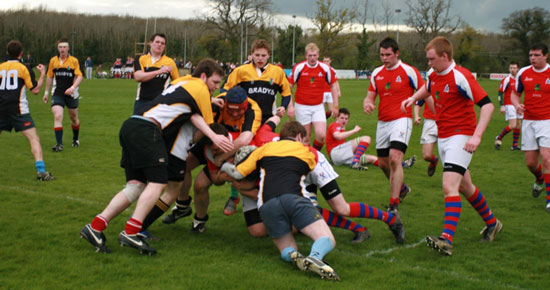 Waterford Institute of Technology added to their substantial trophy cabinet by winning the final of the All Ireland Colleges Fresher’s Final yesterday at Barnhall RFC.

Yesterday’s win was in addition to their senior side winning the All Ireland Colleges Cup at Waterpark RFC last week.

James O’Sullivan’s try just before the interval was the defining moment of this All Ireland decider as it provided the Waterford Institute with a strong platform to work off upon the resumption.

Maynooth were on top in the first half, especially in the territorial stakes, largely thanks to a strong wind behind their backs. Barnhall’s U20 fly-half, Ben McCarty scored the game’s opening score after just five minutes with a superb penalty effort and when he extended the lead to 6-0, another penalty from the ’10 due to Waterford’s Justin Kirch’s killing of the ball, the signs looked extremely healthy for the Kildare side.

Yet, the Deise County remained a tight-knit outfit when it came to defending their try-line and despite Maynooth probing hard through the bulk of Padraig Beatty, no gaps were to be found.

With the wind advantage one felt that Maynooth would need to rattle up a few more points if they were to stand a chance in the second period, so when O’Sullivan went over following a terrific cross-field kick by Shane Kelly to leave the score at 6-5, it was Waterford’s game to throw away.

In the second half, James Kirch used the wind to great effect with some terrific positional kicks into the corners and from there Waterford’s maul did the rest. Waterford’s forwards began to take control with James O Sullivan again scoring together with Joe McSweeney and Pat O Connor all crossing over the line. With Kirch finding his shooting boots, his three beautifully converted kicks left the score at 27-6; game over.

Maynooth managed to grab a late consolation goal through the hard-working McCarthy which he dually converted after but it was a case of too little, too late.

Con and Garryowen Set for the Final