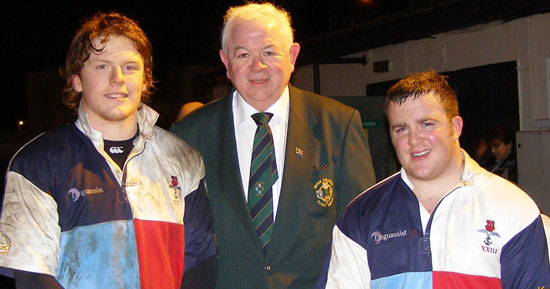 The Irish Colleges produced a scintillating display of running rugby when they defeated The UK Combined British Services (Army, Navy, Air Force) in this inaugural fixture at Suttonians Rugby Club Dublin on Friday 23rd February 2007 by 34pts to 17pts. The victory included three exceptional try’s scored by wingers and all were initiated by man of the match scrum half Brendan O’Brien, from Limerick, of Wanderers Rugby Club who is in Colleges at Blackhall Place, Dublin.

There was a special tension on the way to Sutton, both teams had a Garda Escort through Dublin at rush hour. The blanket of security at the ground and the possibility of protest added to nervousness of everyone concerned. The Irish boys rose to the occasion and were not overawed by what was going on around them. The game was only 10mins old when Brendan O’Brien produced quick ball on his own ten meter line for Out Half Brian Collins of IT Blanchardstown, Dublin and Clontarf Rugby Club to give a skip pass to Eric Moloney of Cork IT who released his teammate at college and at Dolphin Rugby Club winger Gary Conway who ran forty meters before passing inside for Peter Budina from The University of Ulster @ Jordanstown and Ballymena Rugby Club to score a special try. Brian Collins who played for Ireland U19’s in Dubai last year converted.

The Combined Services replied with a penalty on 15 mins by out half Phil Thomas which was cancelled out 5 mins later when the Irish pack who were attacking the English at ruck and maul caught their back line off side and Brian Collins kicked the resulting penalty to take the score to 10pts to 3pts in favour of the Colleges. The pressure the Irish pack were exerting forced the Combined Services to spill ball going forward and quick as a flash after 22 mins Brendan O’Brien made a searing break of 30 metres and released Gary Conway who finished the move with a try in the corner, as usual Brian Collins converted the difficult kick. The English Services then on 28 mins got themselves back into the game with their best move of the game when Jason Mills beat everyone to the touch down and once again Phil Thomas converted to conclude the first half scoring with the Irish College leading by 17pts to 10pts.

The second half started with the Irish pack controlling the game the front row of Colm Murphy of CIT and Cork Con, James Taggart of UUJ and Ballymena and Stephen Snell form the National Colleges of Ireland and Clontarf were outstanding in both the set pieces and in loose play. The line outs were dominated by Francis Broderick of Limerick Institute and Garryowen and Barry Holmes from Dublin IT and Greystones. The Colleges back row had a great battle with their opposite numbers and Eoghan Nihill from LIT and Garryowen, Maurice Power from CIT and Highfield and number eight Stephen Corr from North West Institute and City of Derry won plenty of good ball and forced the Combined Services to infringe leaving Brian Collins to kick a further three penalties to put 16pts between the teams with three quarters of the game gone.

The Combined Services had made a few strategic substitutions and after 72 mins their big winger Josh Drauniniu scored a try in the corner after a cheeky break by their scrum half Ryan Walsh which was converted by Phil Thomas. This brought the score to 26pts to 17pts and the Services were right back in the game. The Irish Colleges have made some changes Sam Duffy from North West Institute Derry had come at prop, Bat Duggan from the Garda College and Clonakilty came on at hooker and Ambrose Conboy from NUI Galway and Galwegians. Sean Carey from NUIG and Buccaneers replaced Gary Conway and made an immediate impact with some powerful running on the wing.

The Irish forwards and backs were being driven on by captain fantastic Michael McKeever from UUJ and Belfast Harlequins. They were winning plenty of ball going forward and Sean Carey was on hand to nonchalantly drop a goal on 76 mins. The crowing moment of the game came in injury time when Sean Carey got the ball on the wing and with three men to beat and very little room he showed his class by standing them up with a check inside and then had quick feet to go around them and score one of the finest try’s ever scored for the Irish Colleges Rugby Union. John Nichol from Stranmillis College Belfast and Queens University had an outstanding game at full back while Peter Baird from UUJ and Malone Rugby Club Belfast showed what a special talent he is when he came on as substitute and put down a marker for a starting position for the Irish Colleges in their next game.

This was a fantastic victory for Irish Colleges in a game played between two equally matched teams. This fixture will become an annual affair with the English, Scottish, Welsh and French Universities forming a six team tournament next year to coincide with the Senior Internationals. The Colleges Team Manager Don Spicer and his Head Coach Shay McGuinness and his coaching staff along with Jamie Balls Director and Steve Sinclair Head Coach and the backroom staff of the Combined Services were generous in their praise of the standard of rugby played and the commitment from both sets of players. John O’Loan President of the Irish Colleges thanked Suttonians Rugby Club through their President Jim Quill and former President Jim Dowling for all the hard work and generosity of the members of Suttonians in staging this fixture. The Management of both teams welcomed the announcement made at a Lansdowne Road Reception on Saturday afternoon that Graham Paton through his company Linguassist that they would sponsor this fixture for the next two years.