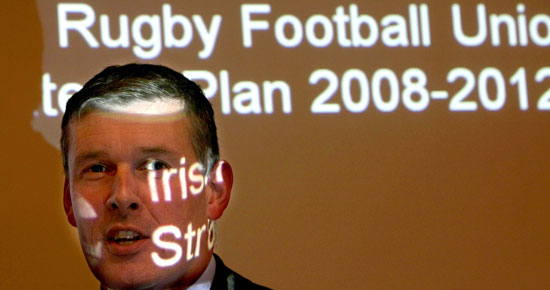 The new plan places emphasis on:

The heart of the new plan is the domestic game programme which was heavily influenced by an extensive market research study commissioned by the IRFU as part of the planning process.

John Hussey, Chairman of the IRFU Management Committee, which was responsible for developing the plan, said: "All of us involved in Irish rugby must continue to challenge ourselves and set ever higher goals in order to maintain and build on Ireland’s position as one of the leading rugby countries in the world."

"The competition in the professional environment is clear for all to see, but our ambition is to provide quality at all levels of the game to continue to build on the foundations of the domestic game, which is the key area for the success of Irish rugby.

"We have an exciting range of new initiatives that we are confident will enable domestic rugby to make great strides over the next four years," he added.

Some of the main objectives in each of the key performance areas include:

Domestic Rugby – A Quality Experience * Provide a quality rugby environment for players and supporters alike by ensuring clubs have the structures, know-how and resources needed including: – 75% of clubs to participate in new club management training programme
– Development and widespread take-up of floodlit rugby
– Establishment of Club Award to recognise attainment of quality standards
– Greater adult participation across all forms of rugby union football
– The highest standards in age grade sport on the island of Ireland so as to provide young players with the best foundations and motivation for pursuing a prolonged playing career well into adulthood

Professional Game – A culture of success through Winning Teams