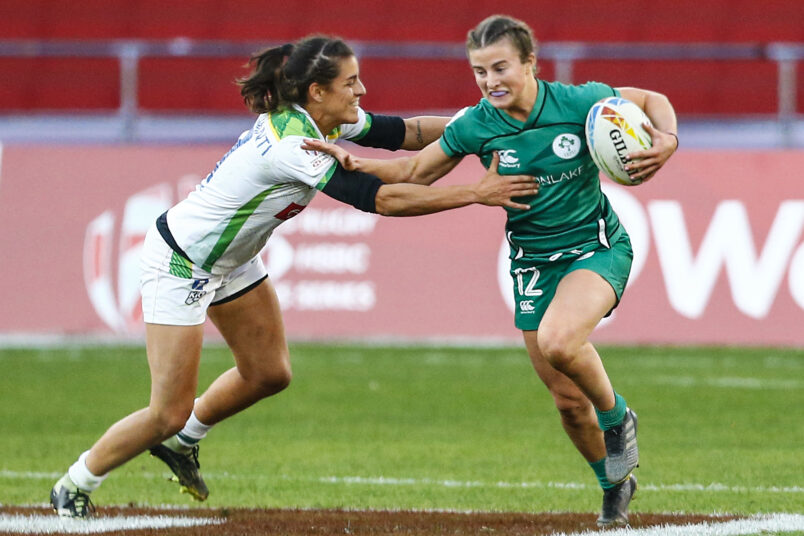 Head Coach Aiden McNulty has named a 13-player Ireland Women’s Sevens squad for the return of the HSBC World Rugby Sevens Series in Langford this weekend.

The Ireland squad arrived in Canada on Sunday evening ahead of the fifth leg of the 2022 Women’s Series, which takes place on Saturday 30th April and Sunday 1st May.

McNulty has been able to retain consistency in selection from January’s historic silver medal-winning performance in Seville, as the group bid to build further and finish the World Series with strong showings in Langford and next month in Toulouse.

Lucy Mulhall once again captains Ireland this weekend, with the likes of Stacey Flood, Amee-Leigh Murphy Crowe, Eve Higgins and Beibhinn Parsons all included. There is one uncapped player in the squad as Vicky Elmes Kinlan is rewarded for her impressive performances during a recent training camp in France.

Langford marks the start of an important period for the Ireland squad, with the conclusion of the World Series followed by the start of the Rugby Europe Championship – the first staging post on the journey to Paris 2024 Olympic qualification – and a standalone Rugby World Cup Sevens Qualifying Tournament in July.

Commenting ahead of the tournament, the Ireland Head Coach said: “It has been an exciting time building towards the next leg of the World Series in Langford. We have set our sights on producing another strong performance off the back of Seville however we are going to have to continue to grow our game if we are going to go one better and win Gold.

“I am confident that the group selected will represent our squad’s values and put in the level of performance we can be proud of. It is a special trip as we shall be awarding a first cap to Vicky Elmes Kinlan who has been outstanding in training and at our recent camp in Soustons. We are very much excited to get back on the pitch this weekend and continue our journey to become a world-class winning team.”

You can watch all the action from Canada on the World Rugby Stream.