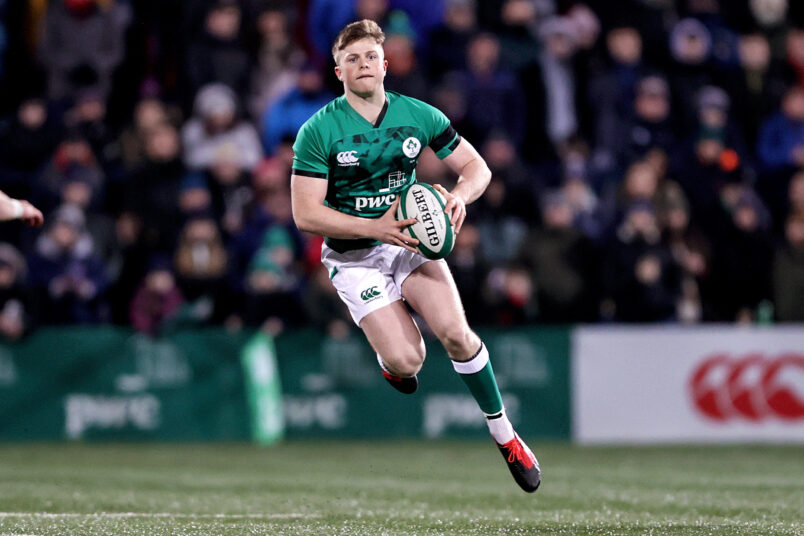 Patrick Campbell set to line out in front of a full house in Musgrave Park. INPHO/Laszlo Geczo

Murphy has made one change to the side that beat England in Round 4, with Aitzol King, who scored a brace of tries in Barnet last weekend, coming into the back three as Ireland chase Grand Slam glory in Cork.

With four wins from four, Ireland top the U20 Six Nations table and know victory over Scotland on Super Sunday would secure a memorable clean sweep of victories.

King joins Patrick Campbell and Fionn Gibbons in Ireland’s back three, with the Ulster duo of Jude Postlethwaite and Ben Carson retained in midfield. In the half backs, Charlie Tector and Matthew Devine are named to start.

Murphy has opted for an unchanged pack once again with the front row of Jack Boyle, James McCormick and Rory McGuire starting together for the fourth consecutive match.

The second row pairing of UCD duo Conor O’Tighearnaigh and Mark Morrissey have been ever-present throughout the Championship for Ireland, while captain Reuben Crothers, Lorcan McLoughlin and James Culhane complete the starting XV.

Commenting ahead of the game, Murphy said: “We are really excited about the prospect of finishing the Championship in front of a sold-out home crowd in Cork. The group have grown remarkably over the last couple of months and we go into Sunday’s game knowing what’s at stake for us.

“This week has been all about sticking to our processes, putting the head down and preparing as well as we can for what will hopefully be our best performance of the Six Nations. The players have remained really focused and we know if we can nail our work, we will give ourselves the best possible opportunity of overcoming the final hurdle.”