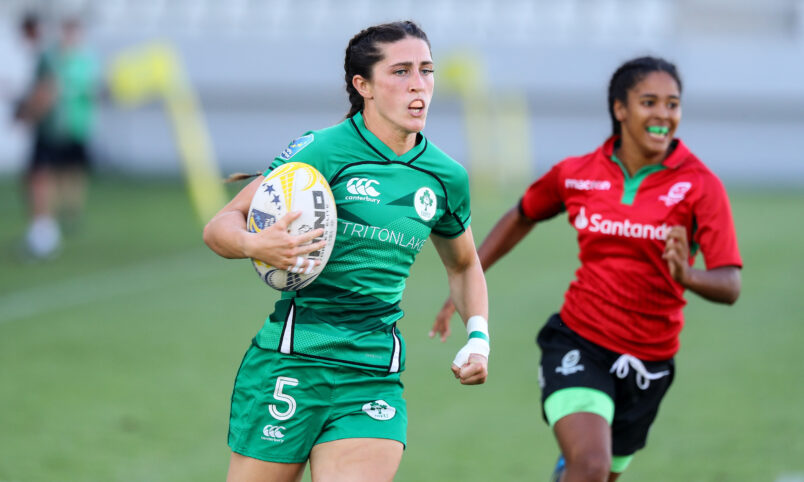 The Ireland Men’s and Women’s Sevens squads, sponsored by TritonLake, have been named for this weekend’s Rugby World Cup Sevens, as excitement builds for the global tournament in Cape Town from September 9-11.

Coming off the back of impressive HSBC World Rugby Sevens Series campaigns, both Ireland teams are brimming with confidence as they prepare to take on the world’s best teams in a straight knockout format at the iconic Cape Town Stadium.

The Ireland Men have eight of last summer’s Olympians in the squad for South Africa, with James Topping’s side recently securing a fifth place overall finish on the World Series, their best to date, while the season’s most prolific try scorer, Terry Kennedy, is among the 12-player panel.

Billy Dardis captains Ireland, who face European rivals Portugal in Friday’s pre-round of 16 encounter (kick-off 8.45am local time/7.45am Irish time), with the winning team progressing through to the round of 16 to face England.

Leinster Academy winger Andrew Smith, Ireland Under-20 Grand Slam winner Chay Mullins and Matt McDonald have all made big impacts during their first season on the series and are set for their first RWC Sevens appearances.

Five players – Dardis, Kennedy, McNulty, Mollen and Conroy – were part of the 2018 RWC Sevens squad that won the Challenge Trophy in San Francisco.

Commenting on his selection, coach Topping said: “We have been building towards Rugby World Cup Sevens since qualification in July, and the wider squad have really pushed each other in preparation for Cape Town.

“We were pleased with our World Series season, achieving a highest overall finish, but we know our performance will need to go up a level this weekend.

“It is a special opportunity for this group of players to represent their country at a World Cup, following on from last summer’s Olympics and a memorable World Series season. The group is excited and motivated to perform in the green jersey this weekend.”

The Ireland Women, meanwhile, have spent the last 10 days in South Africa in preparation for the Sevens World Cup, as Aiden McNulty’s charges bid to continue their strong form having secured two World Series podium finishes in 2022 – a memorable silver in Seville and bronze in Langford.

McNulty has been able to retain consistency in selection but the Ireland coach has had to make a number of tough selection calls, with every player in the wider squad pushing each other during pre-season since the team’s qualification for Cape Town back in July.

The influential Lucy Mulhall will lead Ireland at a World Cup for the second time, having captained the side to a sixth place finish in San Francisco four years ago.

Young stars Erin King, Beibhinn Parsons and Kate Farrell McCabe have been outstanding under McNulty on the series over the last 12 months and will play big roles this weekend, as Ireland open their campaign against Brazil in the round of 16 on Friday (kick-off 1.54pm local time/12.54pm Irish time).

Ahead of the tournament, McNulty commented: “Our training camp in Stellenbosch was an excellent opportunity to put ourselves under pressure and prepare for the World Cup.

“Our precision and ability to bring a level of physical intensity has been excellent all week so we hope to transfer that this weekend.

“Selection as always has been tough, however I believe these are the 12 players who will deliver a world class performance.”

All of Ireland’s matches are live on the RTÉ Player in the Republic of Ireland, while there will be coverage across Irish Rugby social media channels and on IrishRugby.ie. A full list of broadcasters is available here.

All matches live on the RTÉ Player