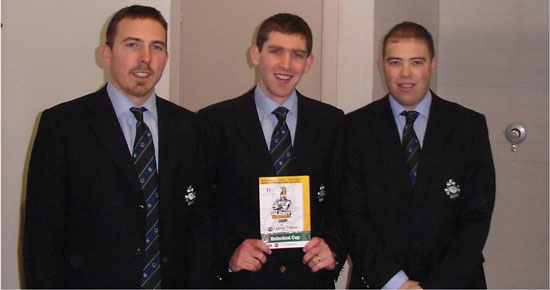 The Munster Association of Referees is giving you the opportunity to give back to the sport. Rugby referees enjoy the same benefits of the game as the players, but without the injuries!

If keeping fit, (referees run six miles in an 80 minute match), travelling, taking part in a lively social scene or getting an adrenaline rush is your idea of a great pastime, rugby refereeing could be for you. As well as the obvious benefits, a referee’s constant study of the game enriches their enjoyment of this lifetime sport. There is more need for referees now than ever.

Benefits of becoming a Referee

Bruff’s George Clancy refereed five Heineken Cup matches last year and was also appointed to the IRB Elite Referees Panel in April. He refereed England v Barbarians in Twickenham at the start of June, and his first full international test between South Africa and Italy in Capetown.

Peter Fitzgibbon of Thomond RFC followed on from a successful Heineken Cup debut in Cardiff v Bristol, to finish his season on a high by refereeing the inaugral World Junior Final between New Zealand and England in Wales. In June he was appointed as the IRFU’s Leisure Rugby Referee Development Officer.

Former Munster winger/fullback and Regional Development Officer John Lacey made a dramatic impact during his first season as a referee, refereeing the AIB Junior Cup Final between Navan and Tullamore, and finished the season by gaining promotion to the IRFU National Panel Contracted Level 3.

Leo Colgan, Garryowen, continues to make a name for himself domestically, refereeing many high profile fixtures, culminating with the end of season game between Old Crescent and Young Munster in front of a five thousand strong crowd. He also touch judged in E.R.C. Heineken Cup games again this year.

The highlight of Darragh McCormack’s season (Waterpark) was representing Ireland at the FIRA Youth Tournament in Treviso over Easter.

Both UL Boh’s Dave O’Shea and Barrie O’Connell successfully came through the IRFU’s IPAS (InterProvincial Appointments System) series of games to bring the M.A.R’s total representation on the IRFU National Referees Panel to 17.

Week One of the Munster Rugby Summer Camps