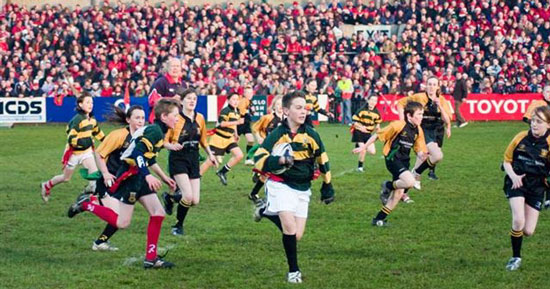 Last Saturday was a momentous occasion for Mallow U18 ladies rugby team, when they travelled to Fermoy to play a formidable Dingle outfit, who at present, head up the U18 league.

Dingle travelled with over sixty girls to play a number of different age groups against Fermoy Ladies Rugby Club. As Fermoy was unable to fulfil the senior fixture due to not having sufficient numbers, Mallow Ladies took up the top match. The Mallow girls have been training very conscientiously in the town park for over a month. The numbers in attendance have been quite impressive over this period, with over thirty-four players at every session. On Saturday the combination of hard work, positive attitude and self belief came together, when they took on the fancied Dingle side and beat them by the one try and a conversion. The atrocious weather conditions did nothing to ensure an exciting game but the Mallow Ladies have seen some bad weather at training and were really excited about putting in a fine performance. Mallow started as they intended to continue and tried to play an open expansive game relied on their superior handling skills. This worked for a good part of the game until weather conditions deteriorated and Mallow had to change tactics.

Mallow Ladies started in a blaze putting Dingle under great pressure and keeping them in their own half for most of the first half. The Mallow halfbacks dictated the whole game with Kate O’Regan magnificent at scrum half and Emma Nyhan at out half. Emma, who captained the team for the day, ran a lot of good ball out of defence and in the second half kicked intelligently to the corners. The two centres put in a sterling performance, Jenny Luddy was the best handler of a ball on the field while Robyn Wallace made some great ground at outside centre. The wingers Mary Kate Glynn and Anita Kelleher were outstanding in attack and defence. It was the former, Mary Kate Glynn, daughter of Shannon legend Noel Glynn, who ran onto a great pass from Robyn Wallace and having beaten her opposite number there was no doubt. Mary Kate ran fifty yards to score under the posts foe Emma Nyhan to convert. At full back Karen O’Halloran had a great game and ran a lot of ball back against the run of play, she gained a lot of hard yards for her team when they needed it most.

As they say forwards win games, backs by how much. This was most definitely a truism for Saturday game. Fiona O’Flynn and Anna Caplice gave the impression they had been playing the game for years. Fiona O’Flynn was hardly recognisable after the match she tackled so much, Anna Caplice had to retire half way through the second half with a dead leg. The foundation and example she had set before coming off was instrumental in the final result. The front row was not an easy place to be in these weather conditions but Sinead Cremin, Ruth Sweeney and Rebecca Luddy were fantastic in all aspects of play. Ruth Sweeney popped a lot of ball from the floor to Sinead and Rebecca to carry forward and set up some great rucks and mauls giving good possession to the back line to use. The line outs were Mallow’s strongest part of their game, despite the fact that Dingle were lifting all their jumpers the Mallow girls were throwing shorter balls to Sinead Cremin and Catriona Kelleher who caught everything.

The back row were everywhere and they needed to be as the Dingle half back pairing were lightning on legs. Fiona O’Flynn on the blind side only got caught once and hit everything that moved from there on. Her partnership of Jessica Hurell at no8 and Clara O’Keeffe at open side were on fire and proved to be a great partnership.

They were instrumental in stopping a lot of the Dingle attacks. Clara O’Keeffe was soon to be replaced through injury for Siobhan Lane who also had a solid game. Aisling Glynn came on at out half as a replacement for Anita Kelleher and had a tremendous debut despite her younger years. On dry and solid conditions, Aisling’s footwork could have seen her make a number of clean breaks, but underfoot conditions did not help.

The final whistle did not come half soon enough as there was some tired legs out there, but when it did the Mallow Ladies knew what it was like to win there first outing of their career. There will more days like this when one considers the wealth of talent that could not travel for many reasons. At least ten players were missing from this very fine performance but the players that played will be difficult to dislodge.