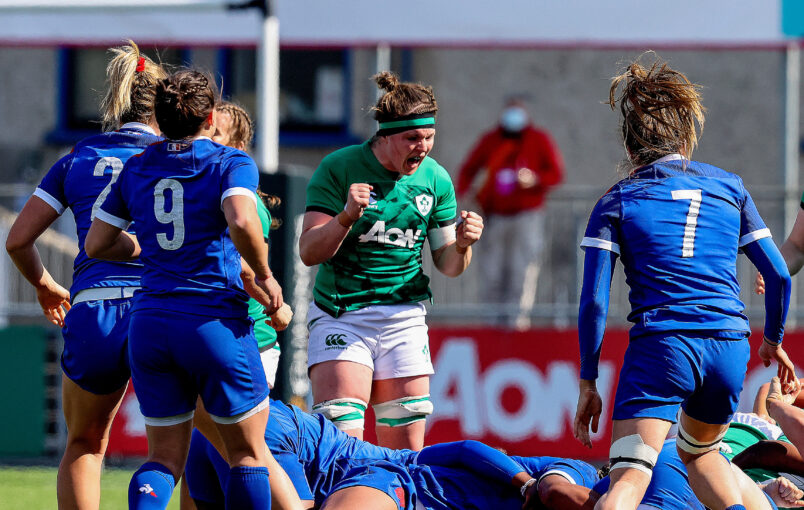 Ciara Griffin captains Ireland for the final time against Japan on Friday. Inpho

The Ireland Match Day 23 for Saturday’s Autumn Test against Japan at the RDS has been named (3pm, live on RTÉ2).

Ciara Griffin will captain Ireland in her final game in green, after announcing earlier this week that she will bring the curtain down on her stellar international career following Saturday’s game.

Head Coach Adam Griggs – who is taking charge of the team for the final time – has named three uncapped players in his Match Day 23, as a second Autumn Test in this November window provides the coaching staff with the opportunity to explore squad depth.

Leinster duo Mary Healy and Ella Roberts and Connacht back Shannon Touhey are all included for the first time and will be hoping to make an impact off the bench, while there are a number of players handed exciting starting opportunities this weekend.

Munster’s Aoife Doyle makes her welcome return to the starting XV and is joined in the back three by Lauren Delany and Laura Sheehan, who are retained from last Friday’s win over USA in Dublin.

Eimear Considine and Sene Naoupu continue their midfield partnership, but there is a new-look half-back pairing for Ireland with Kathryn Dane starting at scrum-half and Enya Breen in the pivotal out-half position. It is Breen’s first start in the number 10 jersey and is an invaluable chance for the 22-year-old to build her Test experience.

Breen replaces Stacey Flood at out-half, who along with Beibhinn Parsons, Eve Higgins and Amee-Leigh Murphy Crowe are not involved on Saturday as they fly to Dubai on Sunday to prepare for Ireland’s return to HSBC World Rugby Sevens Series action next week, as the team build towards the 2022 Rugby World Cup Sevens Qualifiers.

In the pack, Laura Feely, Neve Jones and Linda Djougang are named in the front row, with the experienced Aoife McDermott returning to the second row alongside Sam Monaghan. Griffin starts at blindside flanker for her 41st Ireland cap, with Edel McMahon continuing at openside and Hannah O’Connor back in the starting team at number eight following injury.

It will be a special occasion for the three uncapped players on the bench, as Healy, Touhey and Roberts all hope to win their debut cap in front of a home crowd at the RDS. Roberts, in particular, is enjoying an excellent season having impressed for Leinster in the Vodafone Women’s Inter-Provincial Championship and in the Energia All-Ireland League for Wicklow RFC.

Commenting ahead of the game, Griggs said: “Following on from last week’s win over USA, this is a really exciting opportunity for the group as we head into our second Autumn Test. A number of players have earned their opportunity and it’s important to explore the depth within the group and build layers of experience as the group build towards the 2022 Women’s Six Nations.

“It is particularly exciting to see a number of young players coming through the Inter-Pros and All-Ireland League, and for them to get their chance at Test level this weekend is paramount as the team enters a new cycle.”

Saturday’s game is live on RTÉ2 and tickets are available to purchase via Ticketmaster.ie.