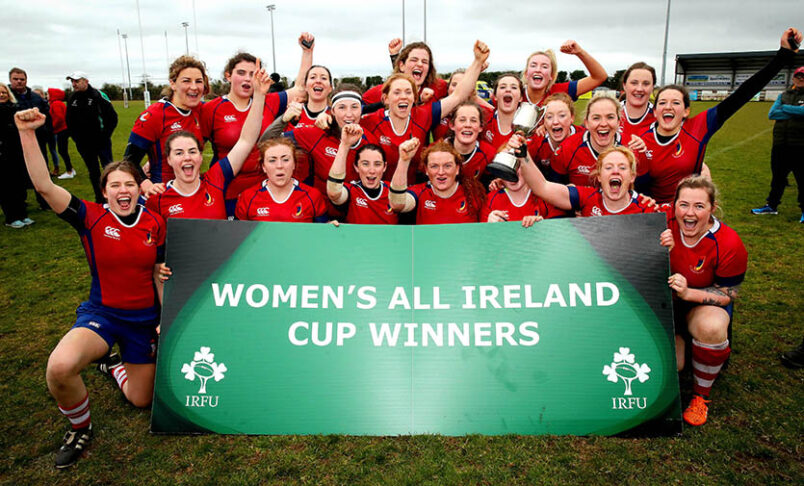 The Women’s All-Ireland Cup becomes the latest competition to make a welcome return with the first round of action pencilled in for the weekend of November 20th.

UL Bohemian were the last side to lift the trophy after victory over Blackrock College in the 2019 final. The 2020 final was one of the first trophy games to fall in the wake of Covid-19 with the title deemed to be shared between UL Bohemian and Old Belvedere. Both sides will meet each other in this year’s Round of 16.

The draw separates All-Ireland League sides where practicable in the first round and so the Malone v Railway Union game is the only other top tier clash. It’s also the first meeting of the sides this season after their regular season league meeting in Gibson Park was cancelled due to Covid-19 impact. The Cregagh Red Sox will have home advantage.

Kerry Rugby formed for the short-lived 2020/21 season to compete in the Community Series with players from Abbeyfeale, Killarney, Listowel, Tralee and Killarney rugby clubs. The Kingdom side currently lead the way in Munster’s Women’s Division 1 league and face a trip to Galwegians.

Tipperary are another side to adopt the county-based model in Munster as an amalgamation of players from Ballina-Killaloe, Carrick-on-Suir, Nenagh and Thurles. They made their competitive cup debut with victory over Waterpark in the first Round of the Women’s Munster Senior Cup in October. The next big test of their development will come against AIL heavyweights Blackrock College.

Tullamore have been motoring well in Leinster’s Women’s Division 1 where they sit joint top of the league alongside Railway Union’s J1 side. They claimed an AIL scalp in the first round of 2019 with victory over Galwegians and will be hoping for another strong performance at home to Cooke.

OLBC are a fresh face in the All-Ireland Cup and will be looking to do the province of Connacht proud when they welcome Ballincollig to the Sportsground.

Ulster can be proud of their representation in this competition with Co. Cavan at home to Wicklow and Queen’s University heading down the A1/M1 to take on Suttonians.

Games will be played on the weekend of November 20th 2021, with fixture details to be confirmed.

Friday Deadline For Clubs To Apply For Sport Ireland Funding