Dorothy Wall Interview | From Fethard Beginnings To The International Stage 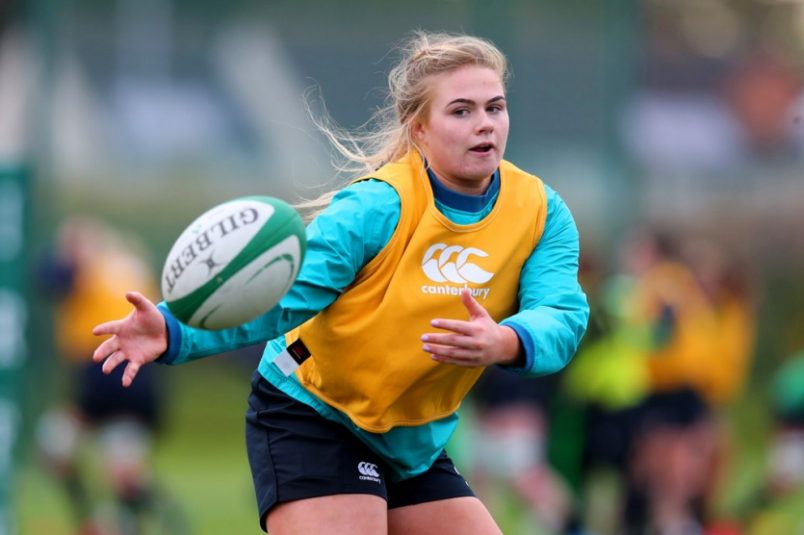 It’s safe to say that the last few weeks and months have been an incredibly busy time for Munster and Ireland’s Dorothy Wall.

The talented Tipperary back-row has enjoyed a whirlwind year which has seen her establish herself as a fully-fledged Ireland international.

The 20-year-old put in a typically physical performance for Ireland in their clash with Italy in the Women’s Six Nations less than two weeks ago. This match was particularly special for Wall as it was her first start for her country in 15s after making three appearances from the bench at the beginning of the year before COVID-19 brought a shuttering halt to the rugby season.

Naturally, the Tipperary woman would have been nervous but she had two international stalwarts to help guide the way; 69-cap veteran Claire Molloy and Munster and Ireland captain Ciara Griffin.

“In the back-row, I had Ciara Griffin and Claire Molloy there with me,” Wall told Munster Rugby this week. 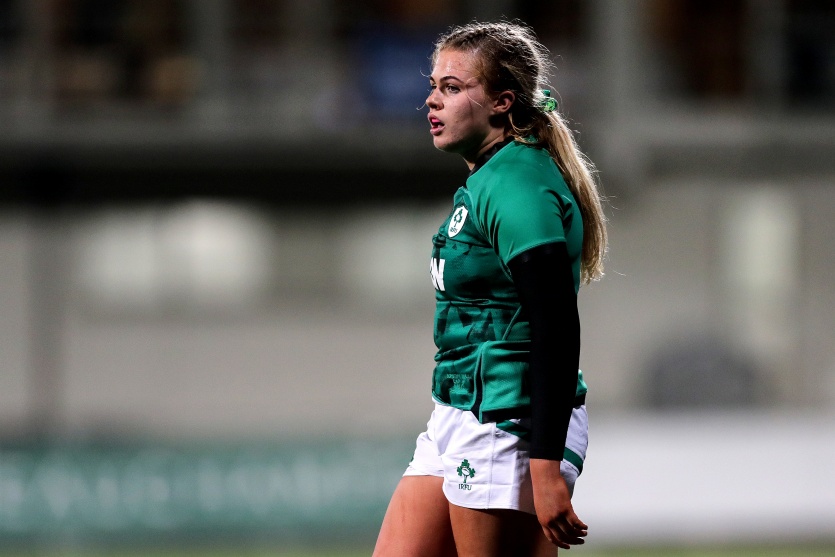 Dorothy Wall against Italy in the Six Nations last weekend

“There was no shortage of experience there. For what I lacked, they made up in abundance. I was nervous but I knew they were there to back me. I really enjoyed it. It was the most physical game of rugby I played ever I say. It was kind of the next step, I hadn’t gotten that many minutes before.”

Although Wall is only four appearances into her Ireland career, her impressive performances this year alongside the likes of other fresh faces such as Beibhinn Parsons, Judy Bobbett and Victoria Dabanovich-O’Mahony have contributed to a lot of excitement surrounding this Irish team.

This younger cohort is garnering much of the attention, having the experienced heads in the squad is absolutely crucial to their development, as Wall explains the importance of having provincial and international colleague Griffin as a mentor.

“It’s kind of a tough-love situation, I know she really likes me deep down but I get plenty of abuse off her,” Wall laughs. “Besides the joking part, I’ve learned loads from her. She’s great. She’ll take me aside and do one-on-one tackling. If I have any questions, I’ll go to her. I’ll talk to (Claire) Molloy. There are loads of knowledgeable players there that you go to and you figure things out. So, she’s great. She’s definitely a mentor for me within the squad and she puts herself out there to be that person for younger players as well.” 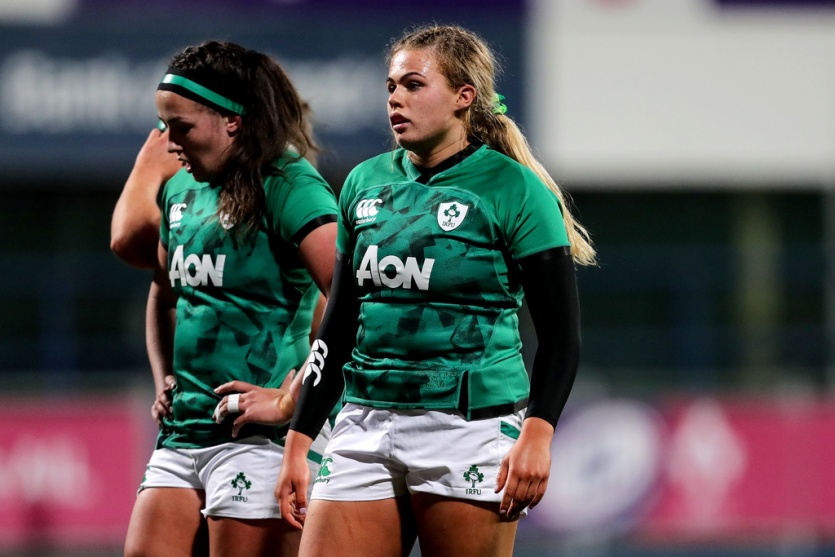 Dorothy Wall in action against Italy

Wall is currently in her third year of studying Radiography in UCD, a huge challenge for any young student but for the 20-year-old, she needs to balance her studies with training as a full-time high-performance athlete. No mean feat.

“I’ve been doing Radiography for the last three years. It’s been up and down, a lot of learnings. Everyone tells you it’s going to be hard when you get into it. It was an adaptation after being in school and your Mom telling you when to study to playing a professional sport. I had been in the Sevens for the last three years, we trained four days a week and you have to fit your lectures around that. It was a bit hard but there’s a lot of doctors (in the squad) so it’s not as if it can’t be done.”

Wall’s hectic schedule is nothing new. In her teenage years, horse riding and basketball, the latter of which saw her compete at a regional level, were major parts of her life before rugby caught her eye.

Growing up five minutes outside Fethard, Co. Tipperary, Wall tells us how an innocent appearance at Fethard & District RFC and seeing the excellent environment which Polly Murphy had created at the club for girls’ and women’s rugby soon sowed the seeds of her love for the oval ball.

“I’ve always ridden horses and played basketball for ages. Our family has always been a big rugby family. My uncles, my whole family are really into it. I don’t know, I kind of went down one day. My Dad didn’t want me to get hurt originally but sure then, it was grand, we fired on! 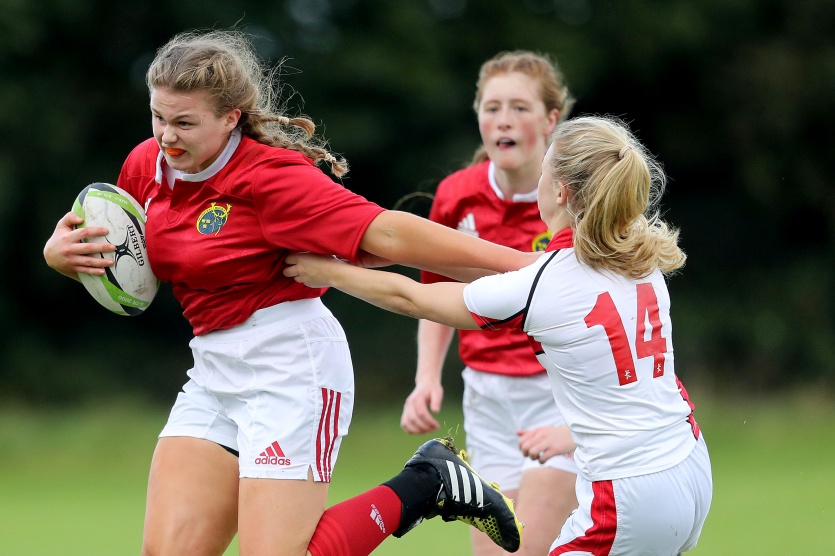 “I just went down to Fethard. Polly Murphy down in Fethard got us going, she’s got a great setup down there with the girls. She’s really put massive work into the underage system and it’s reaping the rewards now. There are so many girls who are playing for Munster and playing for clubs in Dublin from Fethard. It was a great way to start. It was great.”

Fethard & District RFC caters for players in the surrounding area and Wall explains how her teammates would make the commitment of travelling from varying distances for training and matches – a sign of the welcoming environment and community feel which has been fostered by the club.

“It was brilliant. You’d have two training sessions a week and you might have a few girls from Fethard but you’d have so many girls from the surrounding areas like Rosegreen, Thurles, Cashel. People would make a huge commitment to travel to Fethard or to travel to Rosegreen. It was really enjoyable.

“I lived only five minutes from Fethard so my brothers would go down training the same night so we were all down in Fethard every Friday evening after school. We were all down there. You meet the same people and there’s a great sense of community. It’s a very good club to be a part of. I’m very proud of where I come from with Fethard.”

From that moment, Wall’s passion for rugby took over as she then represented her secondary school, Presentation Secondary School Thurles, in the IRFU Girls’ X7s tournaments where her team reached two All Ireland finals. The 20-year-old back-row can’t help but smile as she reminisces about the support she received from her principal and teachers. 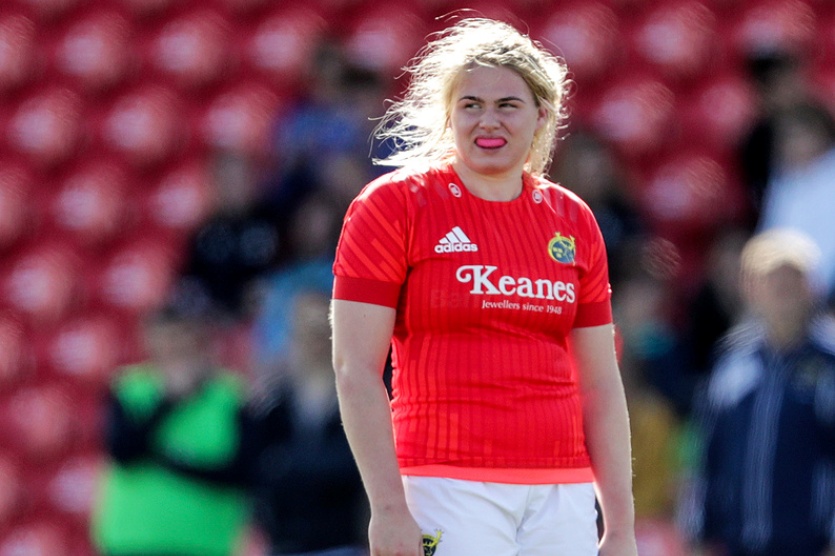 Munster’s Dorothy Wall in an Interpro against Leinster in 2019

“I went on to play rugby in Pres, the Presentation Secondary School in Thurles. So, we were a part of the Sevens competition and we got to two All Ireland finals. Our school was great about it, the principal was behind it. I was in boarding school and one of the nuns in there, Sister Fionnuala, I remember her pulling me aside one day and asking me was it contact. I was like, ‘oh god, like, she’s not going to be too happy with this!’ And she just looked at me and said, ‘right, good!’ I was like, ‘Ok, we’ll keep going so!’ I really enjoyed it in school, I got loads of my friends playing.”

Wall soon began scaling new heights as she progressed through the women’s rugby pathway at both provincial and national level. She says that her time in Munster’s underage system played a huge part in her development which is reflected in how her former underage provincial teammates Emily Lane and Enya Breen have both reached international honours in Sevens and 15s.

“Munster underage was massive for me. I was in with Emily Lane whose one of my best friends and I live with her now, she’s on the Irish Sevens team. Enya Breen who was on the pitch with me there two weeks ago, so we were in the backline actually, back when I was a 13. We were on the backline that won the Interpros underage and that was a big thing for us at the time, too.”

Back to the here and now, Wall is currently on a down week after the Irish squad had a training session last weekend due to the Six Nations clash with France being postponed.

The work doesn’t stop for Wall, however, she’s currently in the midst of her college placement at St Vincent’s Hospital in Dublin which will take up the majority of her time this week. 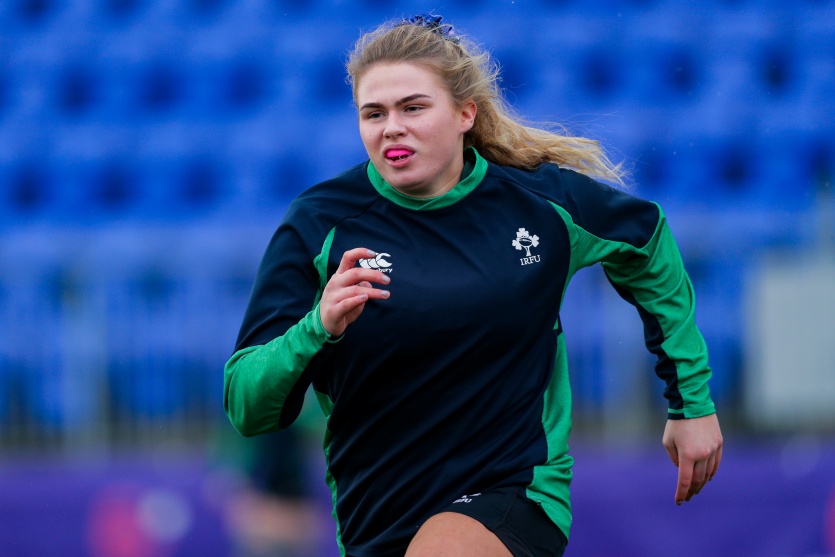 A return to Tipperary to see her family is also on hold until the current government restrictions are eased. Wall hasn’t been home since the end of July as she moved to Dublin to begin preseason with the Ireland Sevens squad.

“Yeah, I’ve been living in Dublin since the end of July, so I came up and we started our Sevens preseason, the first of August. I’ve been up since then and because of placement, I’m in five days a week. Every weekend we’re training. I haven’t had an opportunity to go home but I’m on the phone to my Mom every day. We definitely keep in contact.”

Being away from your family for such a prolonged period of time is undoubtedly tough for Wall, especially after her recent achievement of making her first start for Ireland. The Tipperary native says that she has been inundated with well-wishes and congratulatory messages but she’s quick to switch her focus to Ireland’s crucial qualifying games in December for the Rugby World Cup.

“Yeah, everyone from home (has been sending me messages). My Dad feels like a celebrity walking the down the town, he’s being stopped every second! It’s been great but the big thing now is this December so hopefully, we can kick on and get it done.”

With all that Wall has achieved in her career to date and the huge work-rate which she has displayed in both the red of Munster and green of Ireland, she will no doubt have a big role to play come December.