Declan Kidney lends his support to the U18 Six Nations Festival 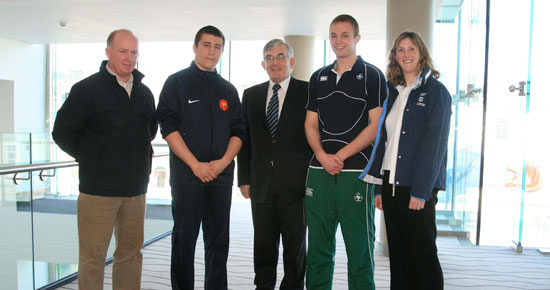 Munster coach Declan Kidney paid a visit to the Irish team hotel on Thursday morning where players from every participating squad in the festival were taking in a presentation from the Irish Sports Council’s Anti Doping Unit.

Kidney, a former Irish Schools and U19 World Cup winning coach, said the experience would stand to the emerging young talents as they progressed in the coming years.

"It’s a great opportunity for them as developing players. Doing it in this environment as well where it’s not a winner take all situation is also something that will benefit them. Just because the game has turned professional doesn’t mean that players shouldn’t have the older values of rugby instilled in them and you will certainly get that in events such as this."

He added that high level rugby for younger players would be key for their development.

"So many of the provincial players have come through these structures and it’s an invaluable part of their development process and it’s a great opportunity for them. On the one hand they give it their best shot and on the other they’ll enjoy their experience."

As teams recovered from their opening games of the tournament where England beat Italy, Scotland overcame France and Ireland lost to Wales, they were given a presentation from the Anti Doping Unit from the Irish Sports Council (ISC).

Dr Una May said it provided players with some essential information.

"For many of them this will be their first time experiencing drug-testing and we provided them with essential advice and information as well as details about their rights and responsibilities in the area. Elite athletes are regularly drug tested and as these players progress in their rugby career it’s important they know as much as they can on the subject."

The teams to play Saturday’s second round games will be announced later today.

AIB League Round Up