AIB League Round Up 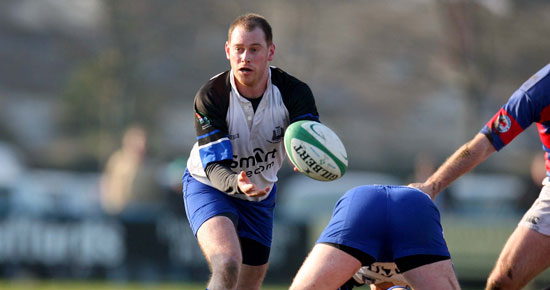 With Young Munster and Bruff both promoted to Division One and Division Two respectively, we look at the movers and shakers in Div 2 and 3, as well as a round up of the Division One action over the weekend

Relegated to Division Three for next season – Suttonians and Barnhall

Division One leaders Cork Constitution marched on at Crowley Park on Saturday afternoon, posting their sixth straight league win but Galwegians did help them on their way.
Con took advantage of two lapses from the hosts – a missed tackle and a charged down kick – to pick off tries. Alipate Tuilevuka missed a third-minute tackle, allowing Con winger Cronan Healy to touch down. Richie Lane added a penalty for an 8-0 interval lead. Centre Evan Ryan grabbed the block-down score to edge Con further in front before Galwegians winger John Cleary got over for a late consolation try – his fourth of the campaign. Making their only trip to Connacht this season, the Leesiders raced into an early lead when Tuilevuka put in a poor tackle and a swift attack, with former captain Frank Cogan central to it, ended with Munster’s Denis Fogarty setting Healy free into the 22 and over for the try. Con could not really build on that early score and had to be satisfied with the addition of a Lane penalty, after 18 minutes, as they took an 8-0 buffer into the break.
‘Wegians had a couple of scoring chances either side of half-time but Connacht squad member Liam Bibo pushed two penalty kicks to the wrong side of the posts. The home side also included John Lyne, Brian McGovern, Andrew Browne and Peter Durcan, four players who are in and around the Connacht squad this season. Just when it looked like ‘Wegians might eat into Con’s lead, a poorly thrown pass from Robbie Shaw forced Bibo into a hurried clearance and Ryan was in quick to get the block-down and notch the killer 58th-minute try in the corner. As it turns out, a losing bonus point would have been enough for the men from the west to guarantee their place in next season’s Division One. However, despite Cleary’s late effort, which Bibo failed to convert from the touchline, Paul Young’s charges had nothing to show for their efforts.

Garryowen guaranteed themselves a place in the Division One semi-finals with a well-crafted 34-17 win over Old Belvedere at Dooradoyle on Saturday afternoon.
The Limerick men lie in third place in the table, eight points clear of Clontarf, thanks to this four-try success. Barry Kinsella got over for an early ‘Belvo try but scores from Conan Doyle, Keith Earls and Alan Kingsley helped the hosts lead 23-10 at half-time.
Felix Jones made a 40-metre dash for the Dubliners’ second try, but Doyle’s second touchdown made the game safe for Garryowen, who could still nick a home semi-final off the top two, Cork Constitution and Shannon. Three tries inside the opening seven minutes got this game off to a bright start at Dooradoyle but, once in front, Garryowen cruised to victory and wrapped up the bonus point midway in the second half. Two of the brightest prospects in the country, Keith Earls and Felix Jones both scored spectacular tries for their respective sides. It was a game in which the handling of both sides proved costly at times, but with six tries the small attendance could not complain that they were not entertained. And the tries by Earls and Jones, two members of last year’s Ireland Under-20 team, were worth the admission alone. This pair look set to make a big impact on the game in future seasons. Garryowen had the better backs with Conan Doyle and Alan Kingsley being especially prominent as a support act to Earls who threatened every time he gained possession. In the forwards Garryowen had star men in Anthony Kavanagh, Paul Neville and Mark Melbourne. The Old Belvedere half-backs Brian Collins and Ruairi Cushion coped well behind a sometimes beaten pack and Jones was the star of the visitors’ three-quarter line. In the ‘Belvo pack, Tim Jago and Vincent Soden were the pick. Old Belvedere led inside two minutes when Jones gave an inside pass to Barry Kinsella who raced in and Brian Collins converted. Three minutes later, three Garryowen players chased a kick by Alan Kingsley and Conan Doyle got the touchdown. Then came the superb try by Earls who flew clear from inside his own half for a spectacular try and a drop goal by Alan Kingsley had the home side 13-7 in front.
A penalty by Collins kept ‘Belvo in touch but ten points in the last six minutes of the half made all the difference. Firstly, Kingsley had a try after the pack tried to drive over several times – Melbourne gave the try-scoring pass to the out-half. Conor Kilroy converted and he then added a penalty. Kilroy added two second half penalties for Garryowen and in between Doyle had his second try. The lightning quick Jones raced over for Old Belvedere’s second try which Collins converted. Once the score-line clearly indicated a Garryowen win, both coaches availed of the opportunity to empty their benches.

Stephen Kelly showed what an asset he is to Shannon by scoring a hat-trick of tries in their impressive dismissal of UCD at Belfield on Saturday.
The sheer pace of the multi-talented winger, who is also a member of the Limerick Gaelic football panel, was too much for the students to handle. UCD took the lead thanks to a Conor Quinn try but efforts from John Clogan, Mossy Lawler and Killian O’Neill had Shannon leading 17-7 at half-time. Further tries from replacement Eoghan Grace and Kelly (3) completed the rout as Shannon guaranteed their place in the semi-finals. The former champions, along with pace-setters Cork Constitution and third-placed Garryowen, can book a home semi-final on April 19 but will be relying on other results to go their way. Gunning for their fifth win in seven league games against UCD, Shannon got off to a sluggish start with Quinn intercepting a midfield pass and ghosting over for an 11th-minute try. Killian Lett converted and with Shannon facing into the breeze, it looked like they might struggle – particularly after last Sunday’s 18-13 reversal to Dolphin. But three tries before half-time gave them the upperhand and they never relinquished that lead. Centre John Clogan notched the first in the 23rd-minute, dashing in at the corner after Munster’s Niall Ronan had been held up. There was some neat play from Andrew Finn and Mossie Lawlor, who slotted in at out-half, in the lead-up to Clogan’s score. Lawlor then turned scorer in the 39th-minute when he spotted a gap and went straight through it, allowing Andrew Thompson an easier conversion for 12-7. In the third-minute of first half injury-time, prop Killian O’Neill got over for his first try of the season. Colm McMahon and Niall Ronan were heavily involved in the build-up and a quick pass from Lawlor out to the left put the unchallenged O’Neill over. Nine minutes after the resumption, Shannon continued to pile on the pressure with replacement flanker Eoghan Grace touching down for the bonus point score. It then turned into the Stephen Kelly show for the final quarter. In the 61st-minute, the winger launched a chip and chase attack which led to his first try, which winger David O’Donovan converted. UCD cut the gap back to 31-14 when pressure near the Shannon line told and hooker Conor Geoghegan crashed over after he had taken a quick tap penalty. But Shannon ended the game on the up when Kelly crossed for a 76th-minute try, after David Quinlan had initially broken off the back of a scrum. Quinlan and Grace both took the ball on in the first-minute of injury-time before Finn offloaded for Kelly to nab his hat-trick score and his ninth try of the league campaign. O’Donovan’s third conversion completed the scoring as Shannon’s backs coach Ian Sherwin, an ex-UCD scrum half, got one over on his former club. The win sent Kelly merrily on his way up to Newry to join the Limerick footballers for Saturday night’s NFL encounter with Down, but his journey was cut short as the game was called off due to an unplayable pitch.

UL Bohemians plunged Greystones into serious relegation trouble at the bottom of Division One as they came from behind to secure a bonus point win at Dr. Hickey Park.

‘Stones sit in last place with only one round of matches remaining. With Lansdowne level on points with them and Dungannon a point above, Colin McEntee’s side still have a chance of staying up but they are living on the edge.
On Saturday afternoon they led UL 8-5 at half-time with Daniel Kenny and Ian Hanly swapping tries. But wind-backed Bohs powered clear thanks to tries from Hanly, Mike Long, Fergal Lawlor, Batt Duggan and James O’Neill. In blustery but sunny conditions, Bohs ventured to the County Wicklow seaside town with little but pride to play for. Having lost five of their last six league games before today, Bohs have slipped out of play-off contention and down to eighth. ‘Stones put in arguably their best display of the season when beat UCD 25-18 at home last weekend but their home form has been decidedly patchy with only two wins from seven outings at Dr. Hickey Park. James Power, son of club President Pierce, landed a first-minute penalty to get Greystones up and running. However, Power’s direct opponent Lawlor begin to have an influence as Bohs played cleverly into the wind and used their big ball carriers to frustrate a committed Greystones pack. A simple case of numbers out wide put winger Hanly over for his first score before young Irish Colleges star Daniel Kenny replied for the hosts, after good work from half-backs Power and Cillian Willis. But backed the elements for the second half, Bohs raised their game sufficiently for the result to be beyond any doubt, just after the hour mark. Hanly was given far too much space to manoeuvre in and he dotted down two minutes into the second half. Hooker Mike Long then followed suit, albeit from closer range, and out-half Lawlor, who has been Bohs’ player of the season, then shrugged off two tackles before making the line. Former Ireland Under-21 front rower Batt Duggan added the visitors’ sixth try before flanker James O’Neill touched down to complete a devastating spell that saw Bohs score 33 points without reply.
With the game beyond them, ‘Stones gained a consolation try ten minutes from the finish when Stuart Abbott barged his way over and Power’s conversion kick was the last scoring act of an entertaining if one-sided tie.

Saturday afternoon’s AIB League Division One clash between St Mary’s College and Dolphin had to be called off due to an unplayable pitch.

After heavy rain in the Dublin 6W area, match referee Mark Hermin from Ulster deemed that the Templeville Road pitch could not stand up to the top flight tie. The decision only came through at 2pm, just half an hour before kick-off, so the Dolphin team, officials and supporters were understandably annoyed at their wasted trip to the capital.
It is anticipated that the game will be re-fixed for next Saturday or the weekend after as the final AIB League regulation phase games are down for decision on April 19.
Mary’s also have to play their Leinster Senior Cup final against Clontarf shortly, while Dolphin, who could still make the Division One play-offs, are eager to keep up their momentum after five straight league wins.