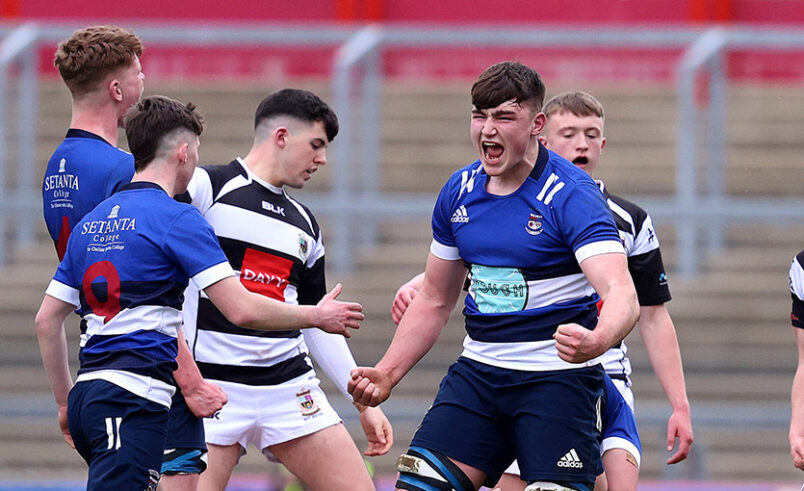 Crescent College Comprehensive have won the Pinergy Munster Schools Senior Cup for the first time since 2014 after the Limerick school recorded a 26-5 victory over Presentation Brothers College in Thomond Park this afternoon.

Both sides showed some understandable nerves in the opening minutes with some inaccuracy at the Crescent lineout leading to turnovers in possession while PBC knocked on in a promising attacking position out wide.

The first clear chance of the game came when PBC out-half Harry Coughlan made a scything break through midfield. The number 10 was sure to score only for Jed O’Dwyer to bring him to ground just inches short of the line. The Limerick school turned the ball over a few phases later much to the delight of the Crescent crowd in the East Stand.

The first score of the game came with the match approaching the 20-minute mark. Some strong carrying from Crescent’s Ruadhán Quinn put PBC on the back foot until the ball was spread wide through the hands of Cian O’Halloran and captain Conall Henchy. The latter delivering the final pass to Brandon Nash to score in the corner.

Oscar Davey’s conversion was good as Crescent took a 7-0 lead just before the 20 minute mark.

The Limerick school almost went further ahead when a long-range Davey penalty attempt drifted wide of the posts.

The Limerick school didn’t let the disappointment last long from that penalty miss as a strong carry off first phase off a lineout sucked in some PBC defenders.

On the next phase, Jed O’Dwyer collected the ball and slalomed through three tacklers to score his side’s second try of the game.

Davey’s conversion saw the Limerick school go 14-0 in front with 10 minutes remaining in the first half.

It took Crescent seven minutes to extend their lead in the second-half. A PBC lineout close to their own line was overthrown and collected by the Limerick school. From the next ruck, Jamie Duggan fired out a skip pass to out-half Davey who touched down in the corner. Davey’s touchline conversion dropped short as the Limerick school took a 19-0 lead.

A good kick from PBC’s Harry Coughlan got the Cork school some good field position and they made it count after collecting a Crescent lineout. From there, PBC kept it tight and were able to cross for their first try thanks to Danny Sheahan’s close-range effort. Ben O’Connor’s conversion attempt was wide of the posts as the lead was reduced to 19-5.

Five minutes later, Crescent looked to have secured the trophy when Max Clein blocked down a clearing kick from PBC’s Coughlan. Clein was able to gather the subsequent bouncing ball and cross for his side’s fourth try.

Davey’s conversion gave Crescent a 26-5 lead with just over 15 minutes remaining and they saw out the remainder for a deserved victory.