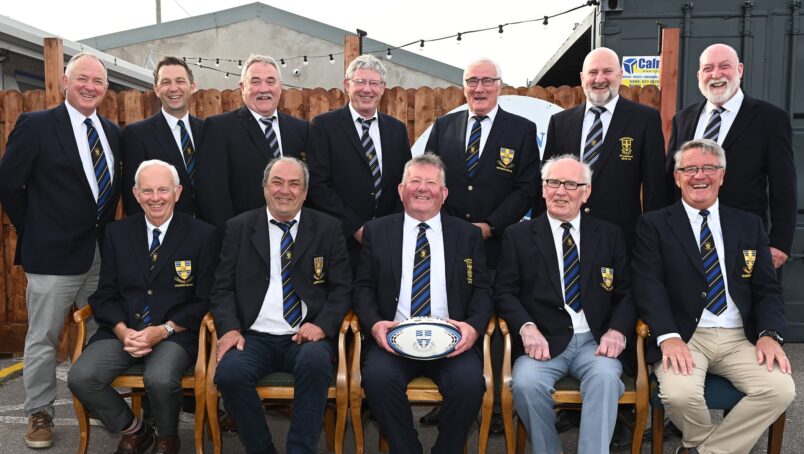 Crosshaven RFC will mark its 50th Anniversary this upcoming season hosting some special events to mark the occasion.

Announcing details at an event recently in the club’s clubhouse were President Philip Guilfoyle and Director of Rugby Mick Good which was attended by a large number of Past Presidents and Club Captains, as well as many local dignitaries and members.

The President gave a brief outline of the club’s history which was founded on the 1st of October 1972 at Pine Lodge where Ted Morrissey was elected President, Tony Murphy Hon Secretary, and Peter Murphy club captain, The minutes of that meeting are on display in the clubhouse.

The club started competing in the South Munster Junior 3 League, winning their first trophy five years later, the McCarthy Cup and since then they have progressed to the top end of the Munster Junior League.

The club’s finest hour came in April 2011 when they became the first Munster Club to win the All-Ireland Junior Cup under the captaincy of Ross O’Connell when they beat Monivea 17-9 in the final at Templeville Road.

They have also won the Munster Junior League Division 1 and 2 titles, Junior Clubs Challenge Cup, County Cup, O’Neill Cup as well as numerous trophies at Junior 2 and 3 level over the years.

In honour of the club’s milestone, several events are planned, and it all begins on the 6th August with the Peter Morrissey Tag Tournament, and they are hoping to have 16 teams competing.

The most notable event will be on the 17th September when the Irish Rugby Legends will play a Crosshaven/Munster Legends side.

This will be the first time that the Irish Legends have played a club side in Ireland, as their usual opposition take the form of other National Legend’s teams around the Six Nations Fixtures.

The Irish Legends will be captained by Shane Byrne and Peter Clohessy will be in charge of the Crosshaven Legends. The game will be refereed by current international referee Frank Murphy who started his rugby career with the club.

On the playing front next season, the club hopes to enter a side in the Junior 2 League Friday night League, and they are also anxious to get a ladies team organised.

As part of the celebrations the Under 18 and 16 sides are planning a tour to Gloucester where former player Bryan O’Connor who now plays his rugby there in the Premiership will help organise events.

The Under 12’s are planning a trip to London Irish.

At Minis level the Under12’s will play a blitz for the Cronin Cup; The Under 10’s will play for the Levis Cup and the Scully Cup was kindly donated to the club in memory of Vincent Scully and the U8s will compete for this Cup throughout the year.

So, a busy season ahead for this progressive rugby club.