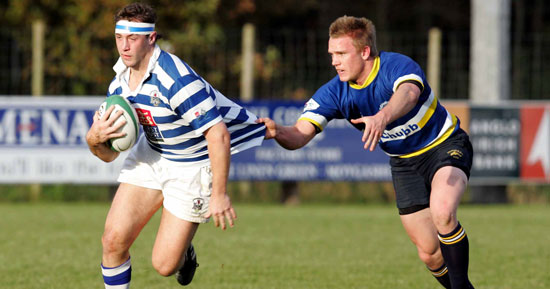 Club news, views and reviews from around the province

"A NIGHT at THE DOGS"

Enter into Raffle to win TWO match tickets for IRELAND v FRANCE on Feb 11th in Croke Park, PLUS €800

The Christmas period was relatively quiet on the playing front with only the seniors and thirds resuming action last weekend.
Our thirds were hoping to advance to the final of the Gleeson league last Sunday but in atrocious conditions we were held to a 3-3 draw against a very capable Cashel side.  Despite the conditions in Coonagh it was a lively encounter and immense credit must go to both sides for their willingness to venture beyond 10 man rugby.  Our only score of the game came through a penalty from Tony Hall in the first half when the elements were to our advantage.  Several scoring chances were created and we found ourselves over the Cashel try line on three occasions, but a decisive decision on whether the ball was grounded couldn’t be determined.  Mark O’Brien was excellent throughout and much or our attacking impetus came from his surging runs.  He wasn’t the only player to stand out and in truth not one of the players on the field let their colleagues down.  Cashel had chances of their own, especially in the second half mainly through penalties, but fortunately they converted only one of their shots at goal.  Not content to defend for the entire second half, our lads showed some superb handling skills on several occasions to attempt to get the winning score, but it wasn’t forthcoming and in the end a draw could be deemed a fair reflection on the proceedings.  The replay is fixed for Saturday the 13th in Cashel and a huge effort will no doubt be required to get a result in Tipperary.  Hopefully the weeks rest will be sufficient time for those that got injured to recover as we’ll need all hands on deck next week.
The seniors entertained Geoff Moylan’s Buccaneers in a friendly in Coonagh last Saturday and in a very worthwhile outing were once again defeated by the Athlone outfit.  One never likes to lose games, but as a prelude to the resumption of the AIB league after three weeks the result was of lesser importance than the game time itself.  With more or less a full strength side we were forced to battle hard and with the final score of 15-17 the lads put in a competent performance.  The game will no doubt have benefit for both sides and the last period was played under the new scrum laws introduced last Monday.
Saturday sees a two game series with Clontarf begin when they Dubliners travel to Thomond Park on two successive weekends.  This week the AIB league takes centre stage and last season’s final paring will undoubtedly produce and intriguing encounter.  Clontarf will be led by "one of our own" as they say, Fiach O’Loughlin which will surely see divided loyalties in the home of our former Chairman and PRO, Gerry and Bridgid.  There may be no losers in that situation, but lets hope that a decent crowd comes out to witness two of the best sides in the league battle it out.  Kick off this Saturday is at 2.30 while next week for the AIB cup game we have a 2pm start.  We congratulate our city rivals Garryowen on their recent Munster Senior Cup success over Cork Con.  Despite our own disappointment at not adding to our 7 successive titles we can be content that the very familiar trophy remains in Limerick.
The seconds are in competitive action on Sunday when they travel to Tom Clifford Park to play Young Munster in the league at 2.30.
Underage fixtures see the U/18’s travel to Castleisland to play a friendly while both U/12 teams are in action in blitzes.
The executive committee have recently launched the club draw which will hopefully generate much needed funds.  The aim of this season’s draw is to begin the process of redeveloping our facilities in Thomond Park, our home for the last 66 years.  The Club pavilion was built by the hands of our members in 1967 and still stands as a testament to those wonderful men, however times, and needs change and the time for a redevelopment is now upon us.  We urge all our members to get behind this venture by purchasing and selling tickets.  The prizes are very impressive with a All new Seat Ibiza as first prize and numerous others ranging from cash amounts to tables at ERC pre match luncheons and Six Nations tickets.  Tickets are freely available around the club and from members of the executive committee and the cost per ticket is €100.  Please, support this vital venture.

The highlight of the festive season from the UL Bohs viewpoint was the excellent victory by the 3rd XV over Kilrush in the Gleeson Cup semi-final.  In good conditions on the West Coast, the team showed great character and much skill when beating a strong local side in a fast flowing game.  The visitors put on all the early pressure, despite playing against the hill and the wind in the first half.  However, a poorly organised defence against a Kilrush passing movement deep in their own half allowed the home side break out, and then gain a penalty outside the UL Bohs 22.  This was slotted, with a fine kick, and another successful penalty later in the half saw Kilrush lead by 6-0 at the break.
In the second half, UL Bohs put some fine rolling mauls together, and this proved a most profitable way to gain ground.  It was from such a maul that the visitors finally broke through the Kilrush defence.  Initial breaks by Tommy Ryan, John Flynn and Stephen O’Dowd were stopped before Colm Likely set up a ruck in front of the Kilrush posts.  Quick rucking released Mike Reddan and when he was halted just short of the line he slipped the pass out of the tackle.  Although the ball was near his ankles, Conor O’Beirne held the ball expertly and dived over near the posts.  Sean Wallace added the points to give UL Bohs a narrow lead.
The advantage was extended later in the half when from another rolling maul, Andy Keogh (who had put in some good breaks all day) took the ball down the blindside and sprinted home from the ’22’ without a hand being laid on him.  Although the conversion was missed, Sean Wallace put over a penalty to give UL Bohs what appeared to be a safe 15-6 lead.
It would not be UL Bohs if they did not put their supporters through the wringer!
A poorly directed kick was collected by the Kilrush winger deep in his own ’22’.  He broke through the massed red line and passed to his outhalf who was able to trot over the line and run around to the posts.  Amazingly, the conversion was missed, but 15-11 was still too close for comfort.
The home side put on some tremendous pressure, but the UL Bohs defence held firm.  A penalty was put to touch as the 3 points would have been insufficient with time rapidly running out, but the visitors put in the tackles and were rewarded with a breakout.  The game ended with UL Bohs on the attack, and we now meet the winners of the other semi final for the prestigious Gleeson Cup.
On Saturday the AIL resumes when we meet St Mary’s in Dublin, and the 1st XV will be hoping to continue the good work which saw us defeat Belfast Harlequins in the final game before Christmas.
The 2nd XV travel to Cork on Sunday to meet Cons in what will be a decisive game in the Munster Senior Seconds League.
We wish Keith Matthews a speedy recovery from the injury he suffered playing for Connacht.

He was educated at the King’s Hospital in Dublin, where he captained the senior team for three seasons from 1930.  Apart from a short period when he learned his trade at Trinity, it was to be a lifelong relationship with the school, where he taught mathematics.

He was a very talented sportsman- as well as his rugby and cricket interests he played interprovincial table-tennis and captained Greystones and Hermitage golf clubs.  In his 80’s he frequently shot less than his age and had a hole-in-one at age 86.

In 1937, he performed the unique feat of appearing for Leinster v Ulster in July and Munster v Leinster in August as he spent much of the summer holidays in Cork.  His international career was curtailed as internationals were suspended for six years due to the 2nd World War.  He made a total of nine appearances for Ireland, six as captain when they won 2, lost 2 and drew 2.  He won Leinster Senior Cricket medals in 1943 & 1950.  He became the first NCA qualified coach in Ireland and national coach of the ICU for many years and in his retirement coached the Irish women at their first World Cup in Australia in 1985 and Irish Cricket Union President in 1979.

In 1944/45 he played with both Clontarf and Dolphin in the same season and was on the Dolphin side under Robin Bolster that won the Munster Senior Cup, defeating the Army (Southern Command) 8-0 in a replay.  Noel Mahony converted Bertie O’Hanlon’s try and also scoring a penalty.

Noel’s older brother Sidney, is an Hon Life Member of Dolphin RFC, he has a Munster Senior Cup winners medal from 1930/31 and a Munster Junior Cup medal from 1925/26.