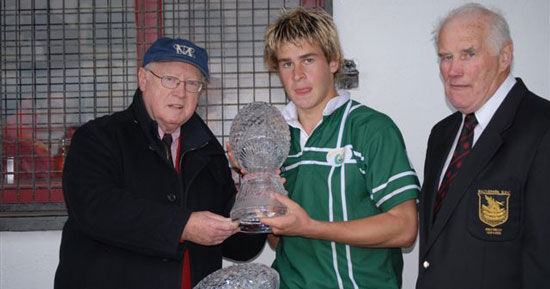 All the latest club news and information from around the province

Membership for Killorglin Rugby Club has opened for the 2007/08 season. Killorglin RFC always welcomes new members, both playing and non-playing, to follow the ongoing development of the club as it has been promoted to Junior League 1 status this year. For a club that reformed only eight years ago, this is a great achievement. A full membership of the club costs €30, a family membership costs €50, and juvenile membership costs €10. The club would also like to meet anybody interested in under-age coaching. Anybody interested in becoming a member can contact club PRO Aidan Clifford at 0879065927, or alternatively leave a message with club secretary Madeline Foley (066) 9762102.
Senior Team training has begun for the pre-season. It takes place at 7pm every Monday, Wednesday and Friday at Killorglin Community College pitch on Langford Street. New faces are always welcome and the club is happy to introduce new players to the game of rugby.
Training of Juvenile teams will begin on Saturday, September 1st. We will also be having a registration day for juvenile teams on Saturday Sept 8th. All players are welcome to play. For information, contact Youth Officer John Costello on 0863558185
Tag Rugby is also still running. It takes place every Tuesday evening at 7pm, in the Dragon’s Den All-weather pitch. This non-contact form of the sport is a fun way of staying fit, and offers a great social outlet also. Both men and women are invited to play.

The above tournament will be held in our grounds in Ballinakill on Saturday 6th.October 2007 commencing at 11:00am

It is envisaged to have approximately 12 /15 teams compete on the day.

This competition is now in its ninth year and during these years teams from Bruff, Thomond, Young Munster, Highfield, Sundays Well, U.C.C, Shannon, Old Belvedere, Naas, Skerries, Bective, Clomnel, Waterford City, Wanderers, Greystones and UL Bohs to name but a few have competed.

Also the Ellickson and Kavanagh families have donated two absolutely magnificent trophies for both the winners and also the Player of the Tournament.

As the A.I.L Under 20 competition is due to commence later in October, participation in this tournament would serve as a very good morale boosting and training exercise for your players.

Should your club wish to enter a team please contact the undersigned for further details. Teams will be taken on a first come basis.

A panel of 22 players (Maximum) together with Team Manager, Coach and Physio will be catered for on the day. Tickets will be issued to the Team Manager for food etc., for this number only.

There will be an administration charge of € 100 per club.

The first competition of the season took place at the weekend when the Meteor Munster Sevens tournament was staged at Old Crescent. After some terrific games, and an epic semi-final against Bruff which was decided only after extra time, UL Bohs and Cork Cons fought through to the final. However- for those who were not in the Limerick region at that time- that was the signal for some extraordinary meteorological fireworks as the heavens put on a full display of thunder, lightning and bucketing rainfall. The final could not be played and the trophy was shared. It is possible that the final may be played before a Magners League game if fixtures permit. Check http://www.ulbohs.com/ or https://www.munsterrugby.ie/ for details.
The summer saw the departure of Mike Tewkesbury, the club’s Director of Rugby, who returned to England for family reasons. During his time in Limerick Mike was instrumental in bringing about changes in the club’s onfield fortunes, and setting up structures off field which should serve UL Bohs well into the future. We wish him well in his new career. Ian Costello has replaced Mike, and as a young but experienced coach, Ian will bring his own brand of enthusiasm and skill to what has become a very demanding role.
The new club President is David Fitzgerald, who has served his time as Hon Secretary for generations. He will be assisted this season by his Senior Vice President Michael Goggin, and Junior Vice President Ted Mulcahy. Dave Hyland has taken over the job of Hon Sec, with Ambrose Garvey and Tom Kinirons retaining their positions as Hon Registrar and Hon Treasurer respectively.
Finally, congratulations to the hurlers of Limerick on reaching the All Ireland after some of the most exciting games seen in years, and a particular ‘well done’ to Ollie Moran who helped Bohs win the 4th Division some years ago, and more recently featured on the UL Bohs Charity Cup winning side.