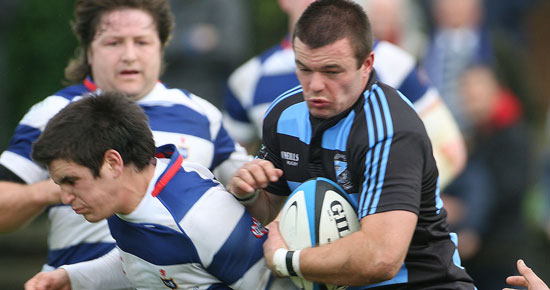 Killorglin Rugby Club were due to take on Waterford City RFC in Round 2 of the Munster Junior Clubs Challenge Shield this past Sunday but, as Waterford were unable to assemble a squad to travel down to Killorglin, the home team was awarded a walkover and progress to face Charleville in the next round in a fortnight’s time.

This coming Saturday however, Killorglin face Castleisland RFC in Crageens, Castleisland at 7:30pm. This will be the first time Killorglin will have played a game under lights and all support will be most welcome. The clubs Under 14 team was at home to Charleville on Saturday last in their first game of the league season. They won 10-5, with tries coming from David Carroll and Deavon O’Flaherty.

Senior Team Training continues every Tuesday & Friday at the Killorglin Community College grounds at 7:00pm. New players are most welcome and our coaches are happy to introduce novice players to the game. Killorglin RFC Underage training continues on Saturday next, 20th September. Under 10, 12, 13 & 14 teams will train on the Dragon’s Den All weather pitch at the Intermediate School at 11am. The Under 16 & 18 players will train on the Dragon’s Den at 1pm. For information on any age grade issues, contact Youth Officer John Costello on 0863558185 or P.R.O Aidan Clifford on 0879065927.

Killorglin Rugby Club’s fundraising draw continues, with a chance to be part of history as its prize. For a price of €10, you are in with a chance to win two tickets to the historic Munster v All Blacks game in the newly revamped Thomond Park on Tuesday, November 18th, along with one night’s accommodation in Limerick’s Clarion Hotel. This may be the official opening of the new Thomond Park and marks the 30th anniversary of Munster’s finest hour, when they beat the All Blacks on 31st October 1978. Tickets for this match are like gold dust, so this may be one of the few chances to get to see the game. For information, call or text Aidan Clifford on 0879065927 or Jerome O’Sullivan on 0873710104. Alternatively, contact any committee member. All money raised will go towards developing the new home ground.
Membership for Killorglin Rugby Club is now open for the 2008-2009 season. Family membership costs €50, a single membership costs €30, while a juvenile membership costs €10. The above numbers can be contacted also for more information.

With the sun shining down on Snugmore and a huge crowd in place, Crosshaven proved too much for a strong Kinsale side in the 1/4 final of the MJCC, leading 10 nil in the first half from a converted try by Peter Matson before Frasier Hodgeson kicked 2 penalties to bring the half time score to 10 6. A second half Kinsale try saw the home side lead by a point but alas it was short lived as Crosshaven went on to be awarded 2 penalties and ultimately the game! Final score 16- 13 to Crosshaven

On a fantastic day in Crosshaven, Kinsale opened the scoring with a penalty from James Lynch, the home side then replied with penalty to level the scoring. Fifteen mins into game, Dave O’Connell scored the first try for Kinsale. Moments later, Kinsale scored a second try through Ian Coughlan which was converted by James Lynch giving the visiting side a 15 -3 advantage at half time. Crosshaven came out with all guns firing in the second half, putting Kinsale under pressure and scored 2 quick tries in succession bringing the score up to 15 13. Kinsale batteld bravely and were awarded for sustained pressure with a drop goal from David O’Connell to leave final score 18 13. Kinsale weathered a fierce Crosshaven storm in the final ten minutes but held on bravely. They will now face either Carrigaline or Cork Con in the final of the O’Sullivan Cup. Next Sunday’s fixture is against Bandon, time and venue TBC

On a lovely sunny day at the new pitch in Clanwilliam, Kinsale set out in search of a victory in the first official 15 a side Kinsale ladies team and their mission was accomplished as Kinsale finished victoriously with 6 tries from Liz Tye, Aimee Brett (2), Sylvia O’Sullivan, Ruth Doran and Aoife Hurley. There was a 110% effort from the whole team proving a great start to another chapter of Kinsale Rugby Club! – Final score 34 22

Next Fixture – Sunday 12 October against Nenagh in Snugmore, time tbc

Shannon got their AIB league campaign off to the worst possible start when they crashed to a 14 point defeat to Blackrock College in Stradbrook. The home side well and truly avenged their two defeats last season at Shannon’s hands as they crossed the white wash on no less than six occasions. It’s hard to remember when Shannon last conceded such a high number of tries and this performance was a far cry from what’s expected of annual title contenders.
There was very little positives that Shannon could take from this game and the fact that they scored 27 points is testament to their tenacity in the face of
A number of Blackrock’s tries can be attributed to silly and needless turnovers or poor defence, but the home side were clinical and at times devastating with slick hands and excellent off loading. Winger Shane Monaghan was their star performer and caused Shannon serious headaches almost constantly when in possession. Crossing for three tries, it was his sheer strength that was the main threat, in fact almost throughout the field Blackrock were physically bigger than Shannon.
Shannon’s cause wasn’t helped as Fiach O’Loughlin was forced to retire at halftime when his side held a slender 22-20 advantage and with the strengthening wide in their favour, ‘Rock took full advantage.
The final result bears little resemblance to the opening 20 minutes when Shannon raced into a seemingly commanding 15-3 lead. They caused Blackrock all sorts of difficulties at the breakdown and the home side conceded 5 penalties in this area. The fifth penalty saw referee David Wilkinson draw a yellow card for Blackrock’s James Ronan, a result of the accumulating indiscretion Tadgh Bennett converted four of those opportunities while David O’Donovan’s long range effort drifted wide. During that 20 minute spell Blackrock managed only a single penalty and it looked as if it would be them that were in for a difficult day. It got better for the visitors when Mossy Lawlor landed a brilliant drop goal in the 18th minute, but then in a devastating 8 minute spell Blackrock put a whole new complexion on the game.
Their first try in the 25th minute was well worked as they went through the phases, sucking in Shannon’s defenders until the inevitable gap came and it was Monaghan who capitalised as he burst over from close range.
That was a deserved effort, but their next two came from poor turnovers from Shannon. Darragh Fitzpatrick capitalised on a turnover deep in his own half and raced the 60 meters to the line with only a prop to beat, and then just three minutes later another turnover gave fullback Niall Morris the opportunity with a little help from his forwards.
From a 12 point lead to a 5 point deficit, Shannon looked shell shocked, but they did respond well. Bennett missed a long range penalty before Stephen Kelly went over for an excellent try just before the break. It started when Dave Quinlan took a quick tap penalty, involved Padraic O’Brien and ended up with Kelly taking the chance, when any number of his colleagues could have been the scorer.
Bennett’s conversion gave his side the lead heading into the break, but the signs of a defeat for Shannon were already sown in the prior 15 minutes.
With the wind in their favour Blackrock set their stall out almost immediately after the restart. They were held up just short of the line in a sign of things to come.
After 50 minutes Monaghan set up his fullback Niall Morris for his second try as Shannon’s midfield defence seemed to collapse. They now had a definitive point of attack and they certainly weren’t shy in exploiting it. Monaghan crossed for his second after 60 minutes after some nice hand work from his fellow backs and a resounding victory looked on the cards. However, Shannon are to be credited for their never say die attitude. They slipped over for a Richie Mullane try to keep them in touch and for a while it looked as if they would hang on for at least a losing bonus. But in the end that bonus point eluded them after Monaghan scored his hat trick in the 73rd minute to complete a rare Blackrock victory over Shannon.